Gurdaspur District Villages to develop their ponds according to Seechewal Model. 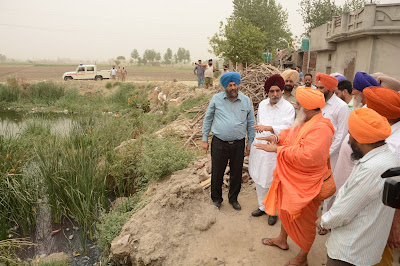 Gurdaspur District Villages to develop their ponds according to Seechewal Model.
Contaminated water of the Villages to be used for irrigation after treatment.
Panchayat Minister Tript Rajinder Singh Bajwa and Sant Balbir Singh Seechewal took the initiative.

Villages development and Panchayat Minister Tript Rajinder Singh  Bajwa's villages of Gurdaspur Distt to be developed under Seechewal  Model. Contaminated after Waters after treatment Will be used for irrigation purpeses as being done in Seechewal and Sultanpur Lodhi. Environment lover Sant Balbir Singh Seechewal after touring the Gurdaspur Distt. villages had evaluated the Circumstances.At this juncturePanchayat Minister Tript Rajinder Singh Bajwa said that 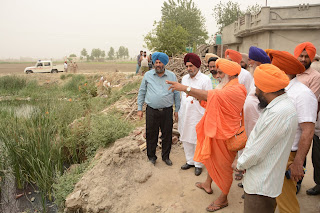 he was extremely impressed with the works of Social welfare being done by Sant Balbir Singh ji Seechewal. The Seechewal model,he has given to the Nation and Punjab has become useful and the cheapest one and most effective to be useful inrusing the used waters. This model will be helpful in saving the water and help in cleaning the river waters as well. The villages Where Sant Seechewal had a visit include Dhaulpur Malianiwal,  Maluduara and  Kotla. It must be recollected that, it is the result of the meetings of Panchayat Minister Tript Rajinder Singh with Sant Balbir Singh Seechewal during mid term pole of Shahkot constituency that Seechewal Model isbeing adoptedstate  to get rid  of the contamination in the villages. The people of Bajwa Constituency are continually coming to see the Seechewal Model.