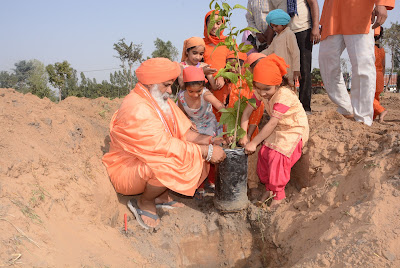 Small hands
Great  Activities
Big Contribution by the Children of Sant Avtar Singh Yaadgari School and College in the Kar Sewa of  Holy Bein.
“Come to learn- Go to Serve” this thought is specially Written on the walls and Gates of the Schools but in the present 21stcentury the numbers of such schools and institutions are quite less, who act on this thought. In this connection Sant Avtar Singh Yaadgari School and College being run  with the support of gursanagts is true to this concept. There has been a major role of the children in the Kar Sewa of Holy Kali Bein which has set an example as role model to clean the rivers and streams of contaminated and poisonous waters, not only in India but for the whole world  also. The foundation stone of Sant Avtar Singh Yaadgari school was laid in May 1999 and Kar Sewa of Holy kali Bein was started in July 2000. Form the 1st day of Kar Sewa the students of this institution have played a major role in the Kar Sewa. The Works of social welfare done by Sant Seechewal, it may be construction work of roads or Kar Sewa of kali Bein, it is true that in the beginning of these works, the team of children had always been with baba Ji. Sant Seechewal often tells that if we inspire and connect the children to plant trees, to clean streams and rivers, to clean the paths etc. Sewa works ,then these children in their life will never allow the environment to get polluted, rather they will contribute for the purity of these things. In the Kar Sewa of Holy kali Bein on the first day, when Baba Ji himself was in the water to remove hyacinth, the school children were also with him. 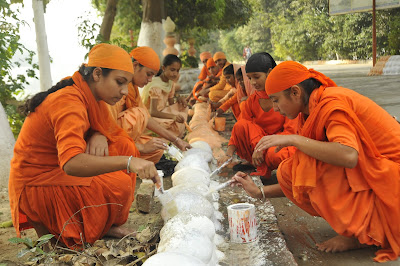 Due to the Pond built at Nirmal kutiya Seechewal, the children were expert in the art of swimming. The children were always present to remove hyacinth from the Bein, pull the hyacinth by the desi hooks to the shores and to serve water or tea to the gursangats. The day they were to come to Sultanpur Lodhi for kar Sewa, they always got excited. On the bus called Narsingh made in the workshop or on the tractor trolly, they used to reach Sultanpur Lodhi singing hymns on the way. The children had so much enthusiasm that they used to remain in Kar Sewa till evenings. People of the area connected with Baba Ji for Kar Sewa whole heartedly , felt so happy that their children were contributing to the Kar Sewa. After the removel work of hyacinth, work of fixing stones was started. 1st day, to make Ghats at Gurdwara Sant Ghat Sahib, Kar Sewa to fix stones was started. That day also the students and teacher were present in the kar Sewa. Planning and making maps of kar Sewa  of Holy Kali Bein was done at the spot. Meter tape was in the hands of Sant Blabir Singh Ji and a teacher of the School. S.Harpreet Singh, the children were leveling the soil and bringing the stones nearer. On first day, after making slopes, stones were fixed. After fixing some stones it was understood that to make it stable Cement should be used to fix stones. During the construction of Ghats the school children contributed continuously. In the work of bricks installation on the paths made on the both side of Holy Bein, school teachers and students had a big role in this Kar Sewa. Sewadar masons used to level the paths and the children force did the work of placing the bricks after them. This works was done by them with such speed and enthusiasm that some time the supply of  bricks would go short. The children had such excitement and enthusiasm that even the Sewadar were doing the unloading of bricks from the truck, the children would install the bricks on the paths same time. 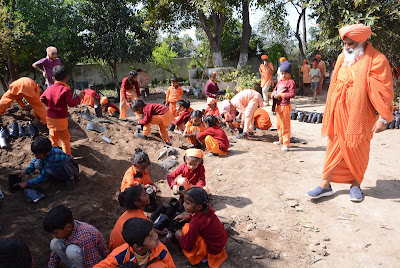 The children and teacher were engaged in this works from the core of their hearts. So, the children and teacher used to do this Kar Sewa even on Sundays and winter and Summer holidays at Sultanpur Lodhi with Joy. The children also participated in the works of planting flower plants on the banks of Bein, and in the work of taking care of them and work of painting of the surroundings of Bein to beautify it and also in the time to time campaign of stopping contaminated waters from falling in the Holi Bein. When the Kar Sewa to remove Hyeinth from the Holy Bein at Dhanoa distt Hoshiarpur the origin place of Bein was started then the students of Sant Avtar Singh Yaadgari College Seechewal and school also took part in the campaign. In the honor of Holy Bein, 5 days Nagar Kirtan was taken out, the school and college students also took part with great enthusiasm. Kar Sewa of Holy Bein is continuously going on, it may be removal of Hycinth , cleaning of the roads, painting of Ghats and surroundings, stopping of contaminated waters from falling in the holy Bein and any type of propaganda and Development, the school and college students of Sant Avtar Singh Yaadgari Seechewal would always play a vital role. They not only achieve good results in the field of education  and sports by participating in these works they have become the care taker of environment, tree planters keepers of the surrounding cleanliness and also social workers. This is a big achievement for Sant Seechewal in the mission of education and Sewa (social welfare).