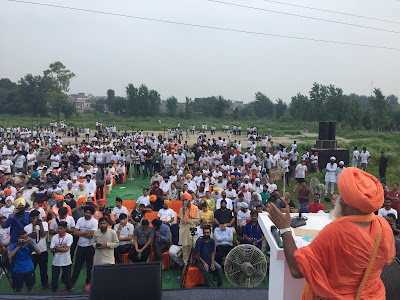 The Survey work of Buddah Nullah started to stop pollution in Sutlej River.


Samples  of  contaminated  waters taken  under the leadership of Sant Seechewal .
Sant Seechewal a member of the Supervising committee formed on NGT’S order, has started the awareness campaign.

The member of the Supervising committee formed under the order of the National Green Tribunal to stop the dumping of poisonous Substances in the Sutlej River, Padam Shree Sant Balbir Singh Seechewal has started the work of taking samples from Buddah Nullah. 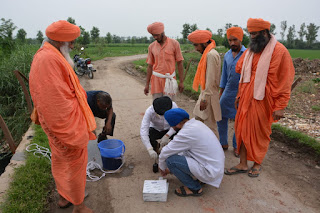 Before it, during the Samagam, to make the people  of Ludhiana, aware of the situation and to make Buddah Nullah pollution free, he said that when the people will start demanding their “right to live” then  the political parties will put under pressure. He congratulated the 12000 people for taking part in the rally “Run for Freedom” and assured them that he will continue his struggle to make Buddah Nullah free of pollution and will also fully support them in this task. He told that the next meeting of the supervising committee will be held at Ludhiana in the first week of September.

Sant Seechewal told that he has also been included in the supervising committee  made under the order of National Green Tribunal. He added that people can also give their suggestions and healthy comments on the website of Punjab pollution control Board, that how the filth in Buddah Nullah can be stopped and its old glory can be reinstated. 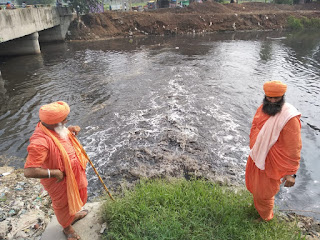 Sant Seechewal taking with him the officials of P.P.C.B, took the samples of the contaminated waters of Buddah Nullah, from the bridge of Village Walipur. He also supervised the working of treatment plants at Baloki, Bhattian and Jamalpur.
He said that more samples of Buddah Nullah will be taken in the coming days. Along with it a survey report on pollution of Kala Sangian Drain  and Chitti Bein will also be put before the committee. He said these contaminated waters, through canals goes to Malwa and Rajasthan. Smt .Shobha Singh from Rajasthan has filed a writ pettition before N.G.T in 2014, that the Poisonous and contaminated  waters, that come from Punjab are drunk by the 1.5 crores people of the 8 districts of Rajasthan and they are becoming prey to cancer and black jaundice. On the passing of 4 years  time, N.G.T has formed the supervising committee to submit its report in the time bound period.