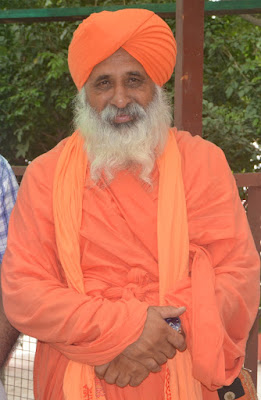 National Green Tribunal formed an advisory committee to stop dumping of poisonous substances in the Sutlej, Sant Seechewal appointed as a member.

First meeting to be held before 10th August
Seechewal Times
The poisonous substances of Budda Nala, Chitti Bein and through Sutlej River, going to Rajasthan, the National Green Tribunal(NGT) has formed an advisory and supervising committee to stop the poisonous substances of Budda Nala, Chitti Bein and Kala Sangian Drain from falling into Sutlej River. Environment lover Sant Balbir Singh Seechewal Ji has been included as a member in the committee. The first meeting of the committee will be held before 10th of August. A barrage on Kala Sangian drain, under the leadership of Sant Seechewal was raised for the first time on 22nd February 2008. An awareness march from Budda Nala, Chitti Bein and Kala Sanghian drain was started in 2009 which went upto Bikaner, where a Cancer hospital is built. Then again on 18th May 2011 a barrage on Kala Sangian drain was raised, where the people from Rajasthan also participated. The National Green Tribunal under the guidance of pollution control Board has been instructed to submit time bound report. National Green Tribunal while making central pollution control Board as a Nodal Agency has formed an advisory committee, Environment lover Padam Shri Sant Balbir Singh Seechewal, Rajasthan Pollution Control Board and Punjab Pollution Control Board has been taken as its members. This committee will prepare a report on the poisonous substances of Budda Nala, Chitti Bein and Kala Sangian drain, dumping in Sutlej River before 31st October and this report will be submitted in the National Green Tribunal’s hearing fixed on 14th November.
Four years earlier on 28th May 2014 a writ pettition under the leadership of Smt.Shabnam Godara from Hanumangarh Rajasthan was made before the National Green Tribunal, which stated that the contaminated waters from Punjab are spreading cancer in the 8 districts of Rajasthan. Punjab govt. and Punjab Pollution Control Board is not taking any strict action to stop the dumping of poisonous waters in the Sutlej River. Smt.Shabnam Godara said while conversing that as the Punjab govt. is not taking any strict action for the last four years, the National Green Tribunal has decided to form this committee. This decision to form this committee was taken during the hearing on this issue on 23rd July by the NGT. During this hearing Pollution Control Board told that only 466 MLD contaminated water out of 650 MLD is being treated. About 200 MLD of untreated water is going through canals to Rajasthan. National Green Tribunal has given strict instructions that not any type of contaminated and poisonous waters should fall into rivers.