Sant Seechewal water sports center players Priyanka and Salomi has brought laurels to the club with their Performance.

Congratulations to the 59 Medal Winners who brought Glory to the nation.
Sant Seechewal water sports center players Priyanka and Salomi has brought laurels  to the club with their Performance.

Sant  Seechewal now on a visit to England has Congratulated the Medal Winners for their achievements in the Asian Games being held at Indonesia Sant Seechewal Congratulated the players Priyanka and Salomi Masih who lead  the university team in the World Universities Canoeing Competition recently held at Hungary (Europe). These players have brought laurels  to the Seechewal water  sports club. This club was established at Holy Kali Bein some three years  back by Sant Seechewal and was handed over to the Punjab players. The club is being used as a nursery to prepare international level players. The Coach Amandeep Khehra told that the players Priyanka Devi and Salomi Masih after being trained at this center were selected for the Hungary Competition at Sukhna lake trials. They have given very good performance at the Competition. 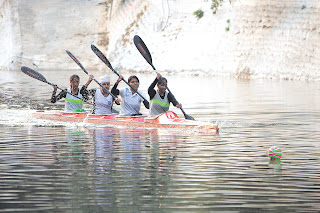 Sant Seechewal Center is the only Water sports center where players are Practicing. Here every  facility like food, lodging and boarding is being provided free of cost. Media Incharge Gurwinder Singh Boparai of Nirmal Kutiya Seechewal told that Sant Seechewal has established this centre  with the motive that no male or female child should get deprived of becoming water sports player due to lack of funds.If such sports centers for each game are opened in every city of India and players are trained at root level in each school and College then time is not for away that India will become a super power in the sports.