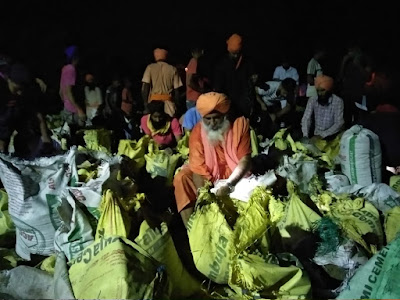 Sant Seechewal took over the charge to stop the Dhussi Bundh near village Baupur on Sutlaj river being swept away by the excessive water current, taking the people of area with him. He stayed till night to make the Bunh solid.
Sultanpur Lodhi 25th September
In order to stop the Dhussi Bundh from being swept away by the Sutlej river, Sant Balbir Singh Seechewal took over the charge last night. Deputy commissioner Varinder Kumar after conversing with him, had asked him to make the Bundh solid at 2-3 places, where water currents are affecting the damage. Sant Seechewal told that he was contacted in the late evening and he immediately taking with him the Sewadars reached there, so that the damaged Bundh could be made solid. Till late night they were engaged in filling the soil bags. Some time in the noon many people had thrown trees on the banks of the river to save the Bundh from further loss. 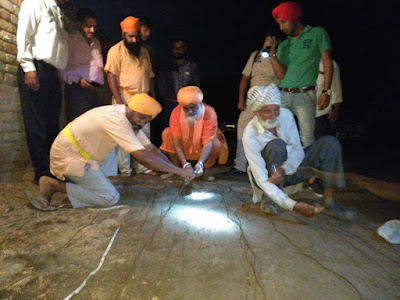 There may have been much improvement in the weather but D.C Varinder Kumar Sharma has instructed the officials to be fully alert to handle the every type of emergent situation, keeping in view the increasing water level of Sutlej river for at least 48 hours. Inspecting the arrangements made after the release of water from Ropar Head works, Deputy commissioner said that the weather might have cleared but keeping in view the bad weather of neighboring  hilly state, full precautions should be taken. He Said that due to continuous rains over the hills, the water level in the rivers has risen, that can cause danger to the district, He said that district administration is fully alert to save the lives and stock of the people. Due to this sudden change necessary steps have been taken. Mr. Sharma asked the Sub Divisional Magistrates to keep continuous watch on the Dhussi Bundh near Sutlaj river and on the increasing water level. He said that after selecting the fragile places, proper arrangements should be made. Mr. Sharma said however the water level in Sutlej river might have decreased  to some extent but no effort should be left to save lives and stocks.
Same way when a report of increased water level at village Baupur reached the Deputy commissioner, he immediately instructed S.D.M Shahkot Navneet Kaur Bal to reach the village Baupur and to review the arrangements being done to make the Bundh strong. The S.D.M remained at village Baupur for the whole day and put the whole govt machinery to make the river Bundh strong, so that the water could not enter the village. She made it sure that the Bundh on the river adjoining the village is made strong with the sand bags. Madam Bal also posted there the police officials to deal with the emergent circumstances. She supervising  the all works herself asked the irrigation, Panchayat and other departments officials to make it sure that the lives and stocks of people are safe.

A breach developed in a Bundh along Beas river.
Sant Seechewal took over the charge with the cooperation of sangat
Bunh repaired within 9 hours
Thousands acres of crops of 30 villages saved.. 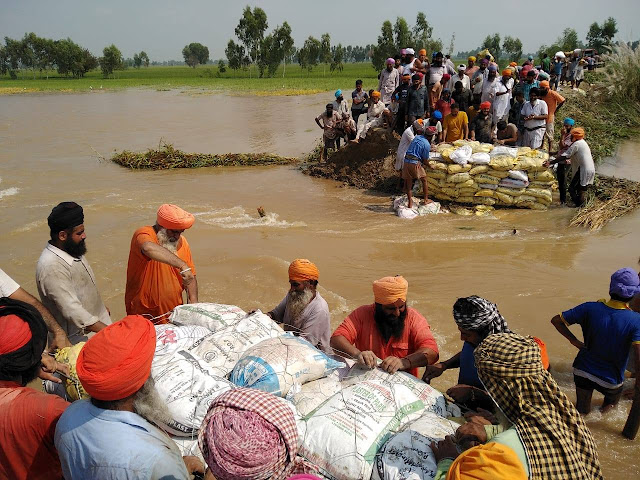 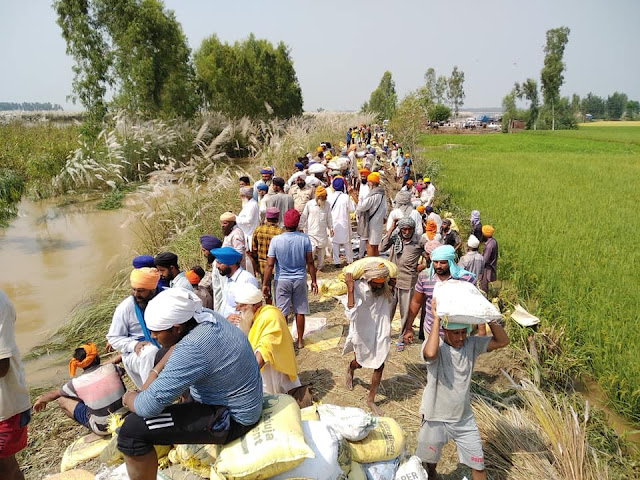