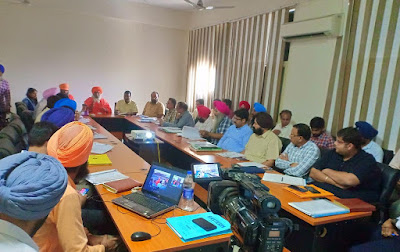 N.G.T team held a review meeting with the officials of the various departments.
Environment lover Sant Balbir Singh Seechewal said that due to weakness of the officials of the concerned departments the pollution problem in Punjab has arisen. He asked the officials that there is still time to understand their responsibility and to do their job in a proper way. Otherwise N.G.T will make the concerned officials answerable and legal action can be taken against them.
Sant Seechewal on behalf of National Green Tribunal made supervising committee to know the Punjab Pollution issues, had come to Ludhiana to have a review meeting with officials of various departments, Sant Seechewal and Central Pollution Control Board official J.Chandra  were leading this supervising committee. In this, the officials of various deptt. Like Ludhiana corporation, Jalandhar Corporation, Sewage Board, deptt. Of Agriculture and Punjab Pollution Control Board were present. 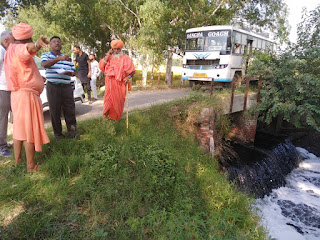 During this it was discussed that which city has what type of pollution problem and to remove that problem, which department is making what type of efforts needed there in.
By the end of this month a report related to Punjab Pollution will be submitted to N.G.T. Sant Seechewal asked the Punjab Pollution Control Board officials to report in the 16th October meeting that what type of efforts are being made to stop contaminated waters of dying industries of Ludhiana from flowing into Buddah Nullah.
N.G.T team also visited the E.T.P treatment plant installed at electro planting industry, Focal Point. During this, a team member J.Chandra C.P.C.B official suggested to connect the clerical work to the modern technique. Sant Seechewal said that only this E.T.P plant in Punjab is working properly.