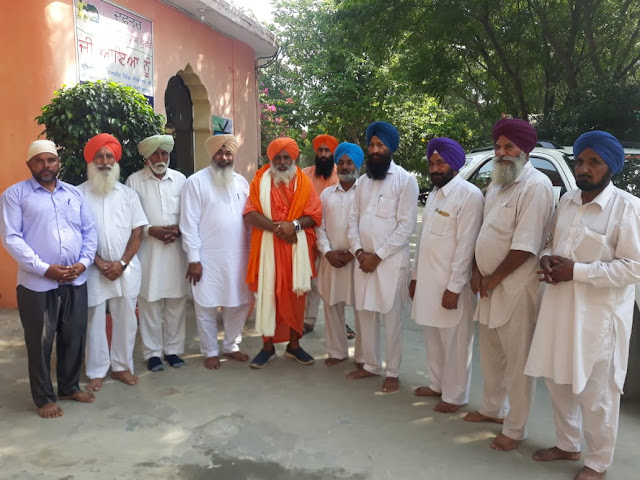 The people of villages honored Sant Seechewal for saving Dhussi Bundh of Sutlej river.
They expressed their gratitude for saving thousands acres of crops
We are always prepared to serve the sangats-Sant  Seechewal .
Sultanpur lodhi  3rd October
Padma Shree Sant Balbir Singh  Seechewal was honored today on the banks of the Holy kali bein by the people of the villages for saving the Dhussi Bundh of Sutlej river , with kar sewa. It is worth mentioning that on 25th September near village Baupur most of the Bundh was washed out. An information about that was given to Baba Ji by the people and the administration. Sant seechewal after reaching there started the kar sewa at late night. Due to which the Bundh was saved from breaking. Due to this kar sewa thousand acres of crops were saved and thousands of people were also saved from being homeless.
The people who had come to honour Sant Seechewal were lead by Sarpanch Malkeet Singh Baupur Khurd. he told that due to hard labour done by Sant Seechewal and his sewadars thousands acres of crops of the villages Baupur, Baupur Khurd, Rampur, Taarpur, Fakhruwal, Sandhan, Langewal, Salapur, Sandhawal, Thamuwal, Buddanwal, Fazalwal, Bhaupur, Bahmanian, Ramewal, Bajwakalan etc are saved from destroying. If Baba Ji had not made the efforts the area might have suffered a loss of crores and thousands of people would had gone homeless. The people of the area said that they are thankful to Sant Seechewal who on receiving the message had reached at night along with his sewadars and made the Bundh solid. They told that in the year 2014 also Sant Seechewal had fought bravely to save the Dhussi Bundh. For these great efforts the people from whole area had come to thank and honour him.
On this occasion Sant Seechewal said that this belongs to those sewadars who had saved the Bundh with their day and night hard work. He added that the social welfare work should be done unitedly by us.