By ploughing parali in the fields the farmers have acted on Gurbani. 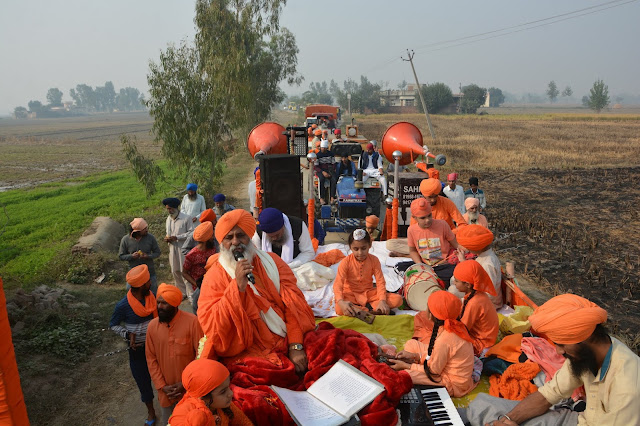 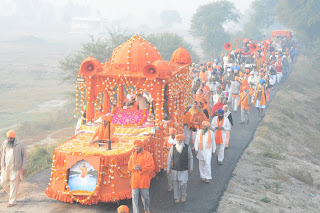 Nagar Kirtan starting among the echo of Jaikaras from Rababsar reached Sultanpur lodhi
Everywhere sangats accorded warm welcome
By ploughing parali in the  fields the farmers have acted on Gurbani:- Sant Seechewal

Dedicated to the 550th prakash purb of Guru Nanak Dev Ji, the 2nd Nagar Kirtan starting from
Rababsar with the Jaikaras Bole So Nihal echoing in the atmosphere reached Sultanpur lodhi. This Nagar Kirtan under the protection of Shree Guru Granth Sahib Ji ,on the Palki decorated with flowers ,being lead by Panj Pyare and passing through the area of Mand was presenting a supernatural view. On the way the farmers sowing wheat and taking care of the Parali also welcomed the Nagar Kirtan with great enthusiasm. In the villages falling along the route of the Nagar Kirtan, gates were made especially to welcome the Nagar Kirtan. It is worth mentioning that Gurdwara Rababsar in village Bharoana is a place where 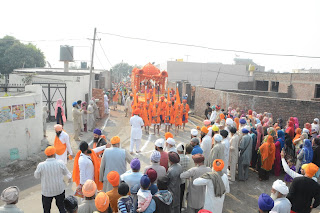 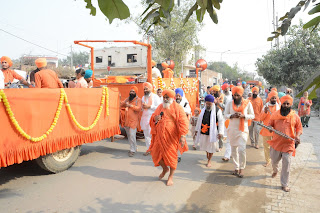 Singh and Singhnian of Sant Avtar Singh Yadgari Gatka Akhara were making the people joyous with display of their gatka activities. The sangats who had come from Manila were showering flowers before  the Palki. Every gursikh was over joyed on seeing the supernatural view. Environment lover Sant Balbir Singh Seechewal during halts in the Nagar Kirtan thanking the farmers of Mand area for not burning the Parali this year, said that they have tried to follow the teachings of Guru Nanak Dev Ji. Passing through different villages when Nagar Kirtan reached Gurdwara Ber Sahib their Shromini Gurdwara Prabandhak Committee after honoring Shree Guru Granth Sahib Ji and Panj Pyare they also honoured the present religious dignitaries in the Nagar Kirtan.
Special arrangements of Langar of fruits and tea-pakoras for the gursangats accompanying the Nagar Kirtan were made in the villages. Head Granthi of Gurdwara Ber Sahib Bhai Surjit Singh while addressing the sangats said that the message "Naam Japna, Wand Chhakna and Kirt Karna" that not only do welfare of a single person but also do welfare of the whole world. He said that the custom of Sewa and Langar in the Sikh religion has made a unique identity in the world.