Religious leaders took responsibility to make Punjab lush green upto 550th Prakash Purb
The campaign to plant 550 plants in every village under the leadership of Sant Balbir Singh Seechewal is underway
The Samagam’s to run for the whole year formally inaugurated.
Sant Balbir Singh Seechewal formally inaugurating the year long functions at Nirmal Kuteya Holy Kali Bein Sultanpur Lodhi upto 550th Prakash Purb of Guru Nanak Dev Ji, made a call that 550 plants in every village of Punjab should be planted upto 2019.
After the celebration of month long samagams of 549th Prakash Purb of Guru Nanak Dev Ji, Sant Seechewal made an appeal that by making the every village of Punjab Pollution free we should attain the blessings of Baba Nanak's dwara. He said that with the help of Punjabi non residents after installing the sewage system in 153 villages upto now the treated water is being used for agricultural purpose.
Discussing on the celebration of samagams of the 549th Prakash Purb of Guru Nanak Dev Ji at the banks of the Holy Kali Bein he said that this samagam was started on 23rd October with Prabhat Pherrian. During this period six Nagar Kirtan were also organised from different historic places. 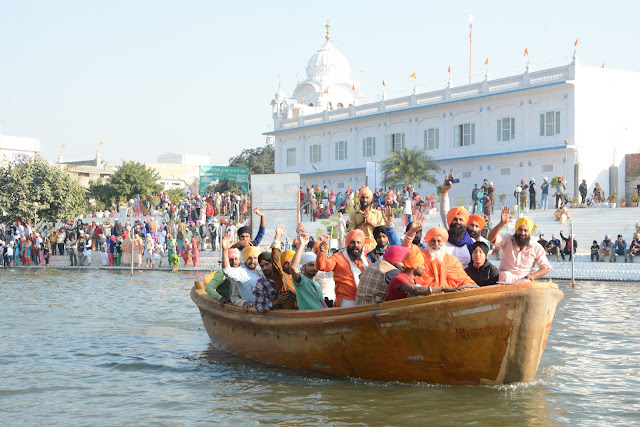 During Prabhat Pherrian and Nagar Kirtans the much emphasis was given on to make the sangats aware of the environment. During Nagar Kirtans plantation of the plants by the religious dignitaries has attracted the people to plant the trees.
During this time 21 Prabhat Pherrian were taken out from villages Seechewal, Chak Chela, Wada Jagir and village Nihaluwal. The sangats participated in these Prabhat Pherrian with great enthusiasm. On dated 4,9,14,18,20 and 23rd November the 6 Nagar Kirtan starting from different religious places reached Gurdwara Shree Ber Sahib. Gurmati Vedant Samelan, Kavi Darbar and 2 Kirtan Darbar at Nirmal Kutiya Sultanpur Lodhi, imparting the unlimited knowledge to the sangats,  were organized successfully. In these religious samagams the sangats from the whole nation and abroad took part with great fervour. 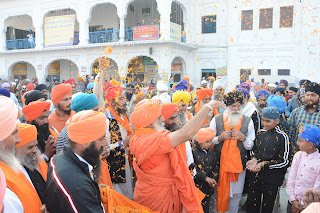 Sant Daya Singh Ji, Sant Leader Singh Ji, Sant Amrik Singh Ji, Sant Mahatma Muni Ji ,Sant Kali Dass Ji and Sant Gurmej Singh Ji Saidrana specially participated in these Samagams regularly.
The paths on the route of the Nagar Kirtan were specially cleaned and pits on the roads were filled and garbage heaps along side the roads were also removed. The sewadars removed the heaps of garbage around the Holy city and the trees stems were white washed to give a beautiful look to the Holy city. Ghats of holy Kali Bein were also white washed. The bhagwan colour done to the stones of flowers beds and pitcher lights stands were presenting a unique spectacle. Sewadars working day and night had made the preparations for the Avtar Purb of Guru Nanak Dev Ji with great enthusiasm.

On this Gurpurab the sangats who applied for the accommodation on Web site made by Sant Seechewal for 550th Prakash Purb, were provided with the accommodation for their stay. The sangats who had come from Delhi, Barnala, Bathinda and Hoshiarpur were made to stay at the houses of sangats. This experiment was quite successful.
Sant Seechewal Ji rendered millions of thanks to the kar sewaks, prabhandhak staff and sangats the followers of Guru Nanak Dev Ji for their cooperation and to make all the religious smagams successful.