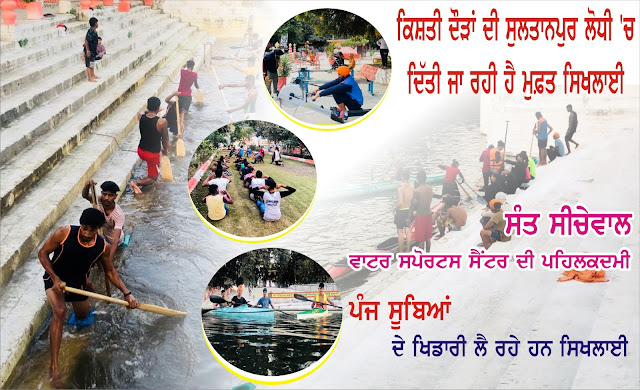 Free training in boat racing is being given at Sultanpur lodhi

In order to promote the water sports in Punjab Sant Seechewal Sports Centre is presently providing free training in boat racing to the players of five states at Holy kali bein at Sultanpur lodhi. The coach Amandeep Singh Khehra of the centre told that the players of Uttar Pradesh, Haryana, Himachal, Rajasthan and Punjab are being given free training in the boat racing. The players of the other states told that they had to spend 10 to 12 thousands of rupees per month on the training at other centres. Here they are getting free training and the poor and shining players are also getting a chance to get training. It is worth mentioning that this centre had organized Guru Nanak Cup in 2015 and National Championship in 2017.
Coach Shri Khehra told that this centre could be established here only with the motivation of Environment lover Sant Balbir Singh Seechewal, it is the first centre of Punjab that is providing free training. Boat racing at Holy Bein was the first time started in Punjab. The unique significance of Sant Seechewal sports Centre is that along with free training, free food and accommodation is also being provided to the players. This centre was started keeping in view 2015 water sports games. This centre has produced national and international level players. Many players have got employment in different government departments.
Sant Balbir Singh Seechewal told that in addition to training in sports this centre is providing moral, religious and social education to the players. The players are also playing an important role in the works of social welfare along with sports.