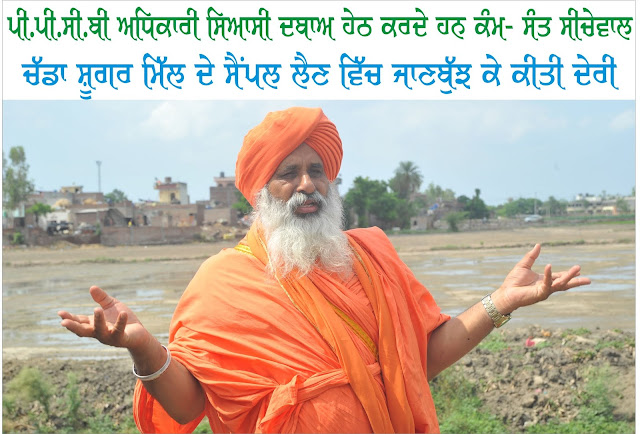 
There was deliberate delay in getting samples of Chadha Sugar Mill
Sant Balbir Singh Seechewal told the Punjab Pollution Control Board that their officials only work under political pressure. He said that there was a deliberate delay in getting samples of Chadha Sugar Mill at Keedi Afgana. Even second time action was taken after the scolding of the officials done by the Chairman S.S. Marwaha. He blamed that even after the report of NGT there is delay in taking action against the mill.
It is worth mentioning that sheera mixed water of Chadha Sugar Mill is again falling in the Beas river. The villagers have blamed that mill management is still throwing sheera in the waters of Beas river through pipes at night. Lacs of aquatic species had already died due sheera of Chadha Sugar Mill in the Beas river. Due to that Chadha Sugar Mill was fined crores of rupees. Even mill was also sealed. During the 8th January meeting at Chandigarh, Sant Seechewal had shown the news published in Danik Jagran and Punjabi Jagran to the Chairman of Punjab Pollution Control Board Mr S.S. Marwaha regarding falling of contaminated waters in Beas river. On this occasion the Chairman Marwaha scolded S.E Rawinder Bhatti and then samples of Chadha Sugar Mill were taken on Wednesday. The officials told that the samples have been sent to laboratory and action will be taken after getting the report.
Political people have bonded the hands of the officials
Padma Shree Sant Balbir Singh Seechewal told that in the mill 5 units are running and in the other places of the nation the units of mill owners are running in large numbers. Mill owners have good relations with the political people and with the company of the officials nature is being destroyed and no strict action is being taken against the culprits. Political people have bonded the hands of the officials.
Soon there will be surprise visits along with team -Seechewal
Sant Seechewal said that he will soon visit the mill. Before it their team will inspect the mill from every angle. It will be checked if the mill is throwing contaminated waters in the Beas river in the nights in a hidden manner. Vedio graphy of all this inspection will be done.