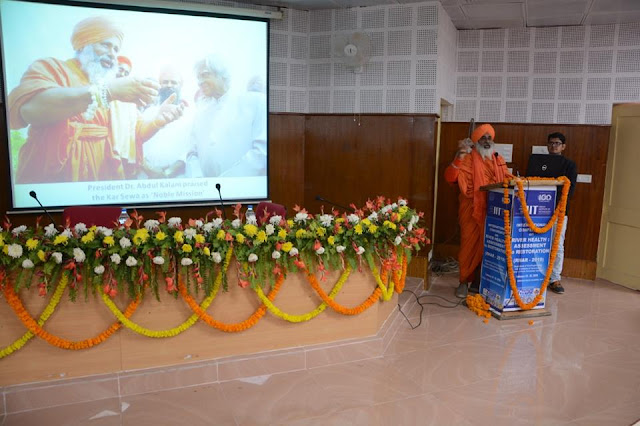 During International Conference the experts from abroad acclaimed Seechewal Model
Kar Sewa of Holy Bein judged the Supreme Task in the world
During three days international conference at Banaras Hindu University detailed discussions were made on searching possibilities of revival and good health of the rivers of the nation. In this conference the experts from Canada, France, Australia, Israel and South Korea and many other countries had arrived.
Seechewal Model established by Environment lover Sant Balbir Singh Seechewal to make the rivers of India pollution free is most effective. Dr Oliver Attaia from France and Prof Hadaas Mamamai from Tel Aviv University of Israel after seeing the presentation given by Sant Balbir Singh Seechewal said that there is no such example in the world where the people with their own hands would have cleaned a river. 162 experts put their views in this three days conference. Deep concern was expressed over the increase of pollution in the rivers of the nation. All the orators were worried about falling of contaminated waters of the villages and cities in the rivers which is badly affecting the health of the people. At Banaras also the filth was being thrown in Ganga at many places.
The facts submitted by the orators were surprising. The speakers pointed out that the main reason for the increase of pollution in the rivers is the lack of will power of the political leaders.  The orators were also of the same view that the political parties especially the leadership of the ruling parties are not interested in stopping the pollution in the rivers and streams.
Sant Balbir Singh Seechewal who has rejuvenated the Holy Kali Bein with the cooperation of people said that instead of people the officials of the administration are more liable who did not take timely action to stop the pollution. He said that Ganga and other rivers of the nation can be cleaned with the cooperation of the people. He said that he believes in action rather than making project reports of some work. The cleaning work of Babe Nanak's Bein was not started on some advanced project or on some big budget rather the work was started with kar sewa from Gurdwara Sant Ghat Sahib of Sultanpur lodhi. Referring to Dr Kalam's interest in the Holy kali bein he said that it's great thing that a President of India after reading the news of Babe Nanak's Bein specially came to see it . With this people's interest in kar sewa increases. He said that the approach of the political leaders towards the natural resources of water should also be same as that of Dr Kalam.
He said that farmers should be made partners in the fruit plants those are planted on the banks of the rivers. The part of the profits should go in the pockets of the farmers. He said that the plants on the record are planted in abundance but their results on the earth are not visible anywhere.
An expert Afrèen Anwar from University of Alberta Canada said that until the filth from the minds of the political leaders is not removed, till then the cleaning of the rivers is not possible. Legal expert Dr Avshesh Pratap said that the Seechewal Model is the best model of the nation. He said that like ‘Beti bachao Beti padhao’ a special campaign for ‘River Bachao Jeevan Bachao’ should be started. He said that the illegal possessions of the rivers by the people with the help of political leaders and mixing of contaminated waters in the rivers is a big problem. To control this situation a solid organization of people like Sant Seechewal should be constituted which could save the rivers of the nation.
Prof Kawang Guk An of Chungnam National University of South Korea and Dr Arshad Hussain of Aligarh Muslim University said that some model can only be successful if it is made according to the problems of the earth. He said that the scientists can not clean the rivers of the nation only on the basis of figures. Nation's rivers can be cleaned with taking along the people of the society as Sant Seechewal Ji did, only then the rivers could be made pollution free. The scientists should first of all make the people aware of and take their cooperation and in it people like Sant Seechewal can play an important role.
Dr V R Sarth Babu said that India's history is such a great that its kings also made millions of ponds, got the rivers dug out and made beautiful Ghats on the banks, to meet the needs of the people. Its example is seen at the Satyugi city of Banaras, the various beautiful ghats were built by the kings. In Banaras only about one thousand pounds were dugout. Kalyugi political leaders of today are filling these ponds and on it they are making colonies, big hotels etc. Until this change in the society is not stopped till then to save the ponds and rivers of the nation is impossible.
On this occasion convener of the International Conference Dr  Prabhat Kumar Singh, Dr Sheesher Gaur, Anurag Ohri, Supriya Mohanti, S B Divedi, Dr Sai Saurabh Asoria, Arvind Kumar Jain, Dr Indra Kumar Jha, Dr Vikrant Jain, Rameeta Warshahne, Sameer Arora, A N Singh, Dr Shomadas Sarkar, Nadeem Khaleel, Sangita Zaira, Sant Daya Singh Ji, Gurwinder Singh Boparai, Dr Narender Dev, Shryas Gunne Namami Gange, Rajesh Shriwastav, Dr P K Mishra, Dr Yoginder Mishra etc were present.