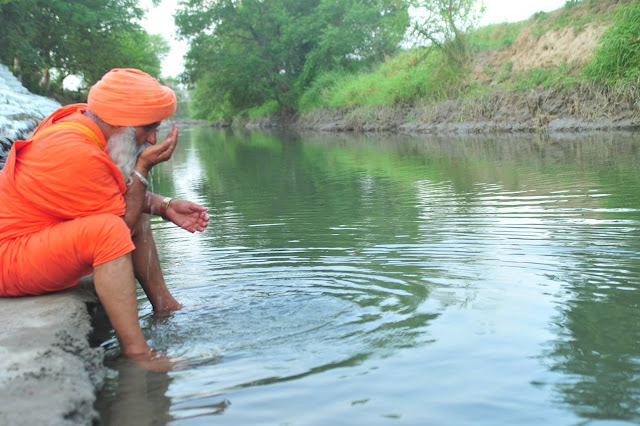 Gursangats have a Baisakhi Bath on the ghats of Holy Kali Bein.

Religious Diwans were arranged at five places on the banks of the Holy Kali Bein.

Pollution and drying out of water in the nation is a serious problem.

Sultanpur Lodhi, 14 Aprill (Seechewal Times)
During the celebration of the festival of Baisakhi on the banks of the Holy Kali Bein Environment Lover Sant Balbir Singh Seechewal while addressing the sangats said that when Lok Sabha elections are going on and all the political parties with their own issues are meeting the people. But it's matter of great regret that none of the party has raised the issue of water pollution as a main issue. He said that almost all of the Nation's rivers have become polluted. Ganga and Yamuna are listed in the most polluted rivers of the world. Such such inhuman act with the life giving natural resources of water is causing bad effect on the human health.
The people of Punjab with their joint efforts have rejuvenated Shree Guru Nanak Dev Ji's feet touched Holy Kali Bein. On the basis of this model the other rivers of the nation can also be made clean. Refering to the religious incidence of the Founding(Sajna) of the Khalsa Panth by Shree Guru Gobind Singh Ji, Sant Seechewal said that on this day of Baisakhi while preparing ‘Khande Batte da Amrit’ Guru Ji took pious water from Sutlej river but now the condition of Sutlej has been made miserable. Now it's not possible to stand on its banks.
He made an appeal to the political parties to raise the issues connected with the lives of the people so that their living standards are improved. Environment, health, education and drugs are such issues that are directly connected with the daily life.
Sangats took holy bath on the occasion of Baisakhi on the banks of the Holy Kali Bein at Gallowal, Bholath, Bhawanipur and Sultanpur lodhi. At Bholath wrestling competition was organized on the island type arena(akhara) on Bein. Religious diwans were organized at the beginning source of the Holy Kali Bein at the Gallowal, Sultanpur lodhi and Bholath. In which the students of Sant Avtar Singh Yadgari School, Bhai Tejinder Singh Sarpanch Seechewal and other dhadis, Kavishri and Kirtan Jathas made their presence with melodious Kirtan. Guru Ka Langar was also distributed in abundance. There was also great rush in the Karsewa on the new ghats being built on the banks of holy kali bein adjoining Gurdwara Shree Ber Sahib. Dedicated to 550th prakash purb Bhog of the chain of Akhand Paths going on since Maghi was also made on the occasion of Baisakhi.