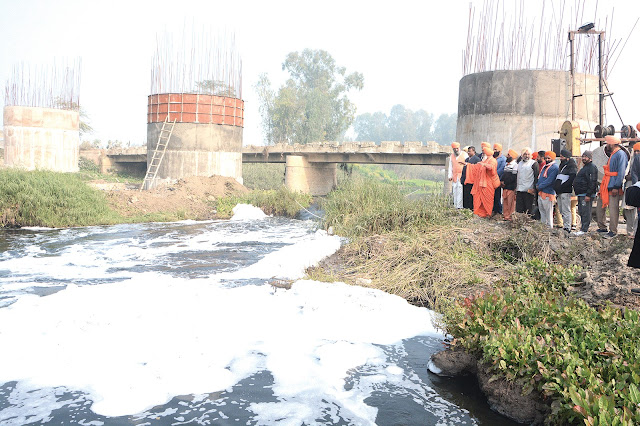 ANJU AGNIHOTRI CHABA
JALANDHAR
"If they can't give us safe and clean drinking water, then why these shameless leaders are coming to us to seek vote," questioned Joginder Singh from Rupewal village, who is suffering from skin disease. For the residents of Rupewal and around 50 other villages in Jalandhar constituency, contaminated ground water remains the biggest issue.
However, safe drinking water remains an issue for the candidates to indulge in mudslinging on each other.
"Instead of focusing at how safe water could be provided to us these leaders from both ruling and opposition parties have been indulging in mud-slinging, and self promotion rather than seeing that people are dying due to several water-borne diseases here," said Manpreet Singh (35), a resident of Nawanpind  Khalewal locating at a distance of around 100 to 200 meters from Chitti Bein, which carries the toxic industrial affluent. The water of it is consumed directly or indirectly by the people.
Located along highly-polluted Chitti Bein, a rivulet, Kala Sanghia drain, a rain water source, and Sutlej river, the residents of these villages suffer from chronic skin diseases, allergies, stomach infections and jaundice. A survey by a Punjab Pollution Control Board (PPCB) member reveals that the numbers are alarming.
PPCB member and environmentalist Baba Balbir Singh Seechewal,  who headed the survey, said that they prepared a detailed list of people suffering from various disease due to contaminated water.
"According to our survey 38 people are suffering from jaundice in 17 villages. As many as 14 people died in the recent past in eight villages. At least 88 residents died from cancer in 27 villages in the last 10 years due to contaminated food chain. Besides, hunderds of villagers are suffering from skin or stomach diseases," he said adding that they measured TDS level and other hard metals so as to submit a detailed report with the PPCB and Punjab government. The survey was conducted by the teachers and students of Sant Avtar Singh Yadgari college Seechewal.
Sukhdev Singh of Issewal village, located along along Chitti Bein, suffers from Jaundice. "People of our village have no other option but to consume contaminated ground water, and use the same for irrigation purpose," he said, adding that if the flow of polluted industrial waste is stopped then the water of Chitti Bein could be fit for consumption purpose.
As Kala Sanghia drain flows into Chitti Bein, which further flows into Sutlej river and its water is being used for drinking purpose not only in Punjab but in Rajsthan too.
The effluents from industries in Ludhiana, Phagwara and Jalandhar is being discharged in these three water sources.
Sarabjit Kaur of Chak Chela village said that all the five members of her family are sick and suffering various allergies which doctors could not diagnose. "Whatever we earn from our farm fields, we spend on medicines only," she said.
With polling day nearing in Punjab, villagers like Simar Kaur have just one demand to raise.
"We don't need their air castles but safe drinking water so that we can live like a human being not animals," she rued.