The Purpose of Celebrating the Centuries means to follow the Teachings of the Gurus:- Sant Seechewal 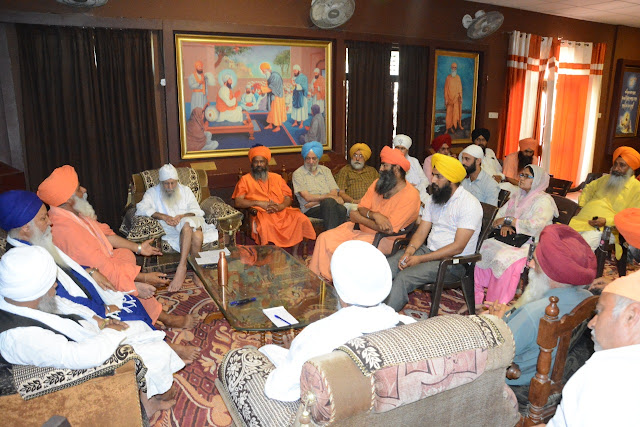 In the meeting held on preparations for celebration of the 550th Prakash Purb of Guru Nanak Dev Ji, a decision was taken to organise environmental conference on international level
A special campaign will be started to plant the traditional trees of Punjab
An appeal made to make the Babe Di Nagri, a solar city
Nagar Kirtan starting from Dhanoa travelling alongside Holy Kali Bein will reach Sultanpur lodhi

In the meeting held on the preparations for the 550th Prakash Purb of Guru Nanak Dev Ji, a decision was taken to organise environmental conference on international level. In the meeting held in the afternoon at Holy Kali bein Nirmal Kutiya, Sant, Mahanpurash, Intellectuals and Social Workers of the area participated. During meeting Environment lover sant Balbir Singh Seechewal said that in 1969, 500th Prakash Purb of Guru Nanak Dev Ji was celebrated but if we look upon the 50 years, it is certain that the environment has suffered the most during this time. He pointed out that the people who worship Baba Nanak have gone away from his teachings. To convey the message of Baba Nanak to every home, the campaign of plantation of 550 plants in every village is going on continuously, and traditional trees of Punjab in abundance should be planted.
Rajyogi Vaid Sant Daya Singh on this occasion told that dedicated to 550th prakash Purb an Ayurveda and Yunani system learning centre will be made at Nirmal kutiya Sultanpur Lodhi.
Narinder Sonia thanked Sant Seechewal for installing 20 kv solar plant at Nirmal Kutiya Sultanpur Lodhi in order to make sultanpur lodhi a solar city and made an appeal to the government and all sangats to develop the Holy city as a solar city. Guru Nanak Dev Ji's feet touched Holy Kali Bein that is also known as the origin place of gurbani, it was decided to decorate it with lights in the nights so that the natural resources of water are saved. Bathing ghats at every village, through which Babe Nanak's Bein pass, should be made so that people may know its importance.
He said that the Nagar Kirtan will be started from village Dhanoa the origin place of Holy Bein and travelling alongside the banks will reach Sultanpur Lodhi. He said that the purpose of celebrating the centuries means to follow the teachings of the Rehbars(Gurus). He said that in 1969, 500th Prakash Purb of Guru Nanak Dev Ji was celebrated and now after 50 years sangats are celebrating 550th year with great enthusiasm. The teachings of Guru Nanak Dev Ji Kirat Karna, Naam Japna and Wand Chhakna and welfare of all will be canvassed. Kavi Darbar will be organised at Nirmal Kutiya. Dr Nirmal Singh Lambra said that the world from global warming can be saved with the principle of Guru Nanak Dev Ji. Prof. Aasa Singh Ghuman said that during 500th samagam 38 colleges and Guru Nanak Dev University Amritsar was started but now the works of that calibre have not been started by the government or other organisations.
Sant Seechewal said that Sultanpur lodhi the historic city should be made clean and tidy. Now every eye of the world is on it. He said that only 6 months have left. These works should be started from now on. History of Guru Nanak Dev Ji on the big screen alongside the banks of the Holy Kali Bein should be displayed at different locations .
On this occasion Sant Daya Singh Ji Gurdwara Tahli sahib, Sant Amrik Singh Ji Khukhrain, Sant Gurmej Singh, Sant Pal Singh Lohian, Baba Mohinder Singh,  Jaspal Singh Bebe Nanaki Trust, Sant Sukhjit Singh, Prof Aasa Singh Ghuman, Dr Nirmal Singh Artist Amarjit Singh, Gurwinder Singh Boparai, Gurwinder Kaur, Kulwinder Singh, Prof Gurwinder Singh and other dignitaries were present.