The people of Rajasthan demonstrated against the polluted water being supplied to them through punjab canals. 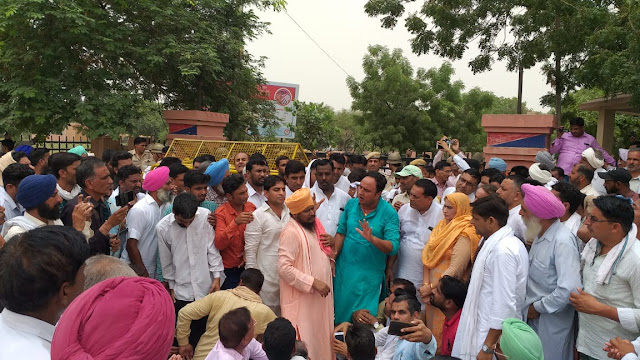 They gave a demand letter in the name of President and Prime Minister
They also wrote letters to the Chief Ministers of punjab and Rajasthan.

Sultanpur lodhi, 15th July
The people of Rajasthan demonstrated at Hanumangarh against polluted water being supplied to them through Punjab canals and gave a demand letter in the name of the President of India and Prime minister telling that the people of 8 districts are affected with cancer and other dangerous diseases due to polluted water. Nirmala Samprada religious leader Hardev Singh taking with him the people of Rajasthan has started Hari Jan Jagriti Abhiyan. He said that today at same time the demonstrations against polluted waters coming from Punjab were held at Ganganagar, Hanumangarh, Barsana and Anoopgarh.
He said that letters have been written to Captain Amrinder Singh Chief Minister of Punjab and also to the Rajasthan Chief Minister Ashok Gehlot to get us relief from the contaminated waters. In this area the contaminated waters are creating such disaster that every village is filled with the patients of cancer. Letters to the president and Prime minister have been sent for the reasons that this problem is of two states and they can intervene directly for suitable action. He said that in the year 2009 Environment lover Sant Balbir Singh Singh Seechewal had taken out awareness march upto Bikaner. Due his efforts a fight against water pollution is going on.
He said if no action has been taken by the state governments and by the central government they will be seize the Punjab Pollution Control Board office at Patiala. He said that Punjab has ground water for drinking whereas the people of Rajasthan are fully dependent on canal waters. This water is being drunk by one crore and twenty five lakhs of people in 8 to 10 districts  and no RO System has been installed even in a single village. He said that amrit like water of Sutlej river is distributing death. He also made an appeal to the people of punjab to raise voice against the polluted water of Sutlej. He said that our fight will go on until the clean water doesn't come. On this occasion Pradeep Singh Sidhu, Arun Arora, Mohan Lal Jain, Vishnu Jindal, Sanjeev Soni, Pawan Soni, Ravi Jindal, Sanjay Piraak and others were also present.