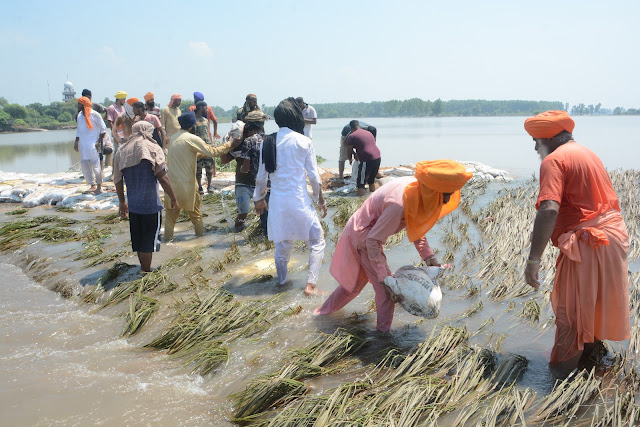 The water stopped leaking from the breaches near village Janian Chahal today at 6 am when more than 300 mt noch was made under the leadership of Environment lover Sant Balbir Singh Seechewal Ji to mold the flow of river Sutlej. With this noch the flood water has receded in the flood affected areas and road transportation has started. Sant Seechewal told that the people of Punjab are so enthusiastic that they are reaching here with the soil trolleys from their areas.
The hard work of Sant Balbir Singh Seechewal and that of the people has been rewarded. With the making of noch  (spur) with the cooperation of sangats and army the flow of the river Sutlej has returned to its old place. About 200 mt away from the Dhussi Bundh breach a noch under the leadership of Sant Balbir Singh Seechewal and army was being made for the last 3 days by working 20 hrs daily.
Sant Seechewal told that this noch has been a big success in molding the flow of river Sutlej .Today also Sant Seechewal remained busy in supervising the work.
With the breaches at village Janian Chahal the river Sutlej had changed its course due to which the flood water was flowing in the fields and villages for the last many days. With the making of this noch Dhussi Bundh will be saved from the pressure. To save it the people from the different districts of Punjab have come with the sand bags. With the decision to make the noch the people had put everything towards it. Where the work of plugging the Bundh was being done under the temporary lights there 20 -20 hrs were also being devoted to the work. The irrigation department has already made a spur at this place but it was ineffective in stopping the flood waters. Xen Ajit Singh of the irrigation department said that with the new spur the water leaking from the breaches has almost stopped. Manrega people are also fully cooperating in the work of Bundh.
Sant Seechewal after making the noch said that if the water leakage had continued from the breaches the plugging of the Bundh would have taken a quite long time. Now this work of Bundh will be done speedily. 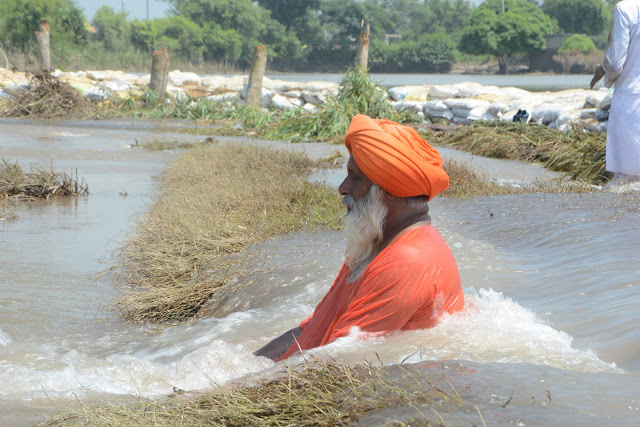