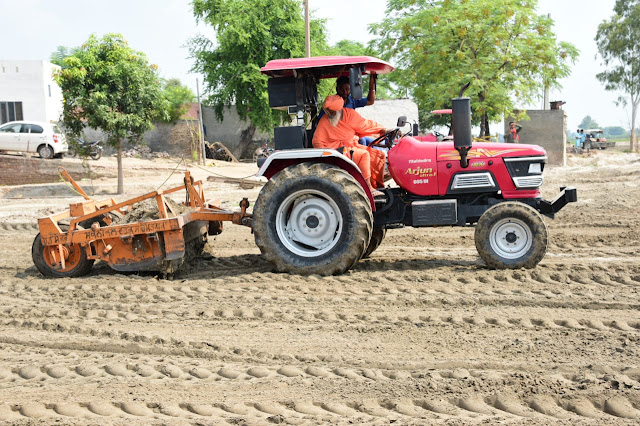 
The work of filling of about 40 to 45 pits that had developed on the lands of the farmers during floods at village Janian Chahal has been started with the help of more than 100 tractors under the leadership of Punjab Pollution Control Board member Environment lover Sant Balbir Singh Seechewal. Also in the adjoining village Maharaj Wala and Chak Wadala the work of leveling the lands of the farmers whose land was damaged in the floods. The lands of the farmers of these villages were badly damaged by the floods. The pits of 5ft to 40 ft on different places had developed on the lands and sand has also spread over the lands due to floods. Whereas the rice crops of the farmers had been completely destroyed there also sowing of wheat crop is also the cause of worry. Because leveling of the land had also been a challenge to them. The farmers from Faridkot, Ludhiana, Moga, Jalandhar, Kapurthala, Kala Sangian, Sidhwan Dona and other places had brought their tractors to level the lands of the farmers. JCB machines were also engaged in filling the pits. The farmers are collectively paying for the fuel for the tractors.
A farmer Major Singh of Janian Chahal told that his father along with his four brothers lives and do the farming jointly. They have about 18 acres of land. The pits about 5 to 40 feet deep had developed in the 4 acres of land. Because there land is very close to the place where the breach at the Dhussi Bundh occurred. Fast flow of the water had washed away the 4 acres of land developing deep pits. Farmer Major Singh said that their rice crops were totally destroyed due to the flood but to fill the pits seems impossible to them. He said that neither they could arrange tractors to fill the pits nor they could pay for diesel. 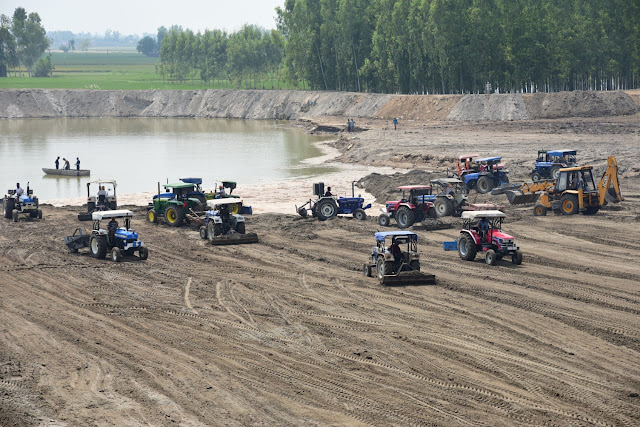 Iqbal Singh and Sukhdev Singh  who had come from Faridkot said that they had heard an appeal made by Sant Balbir Singh Seechewal on the social media in which he had asked for tractors and karahe to level the lands of the farmers. They had reached Janian Chahal today with 15 tractors. Iqbal Singh told that their intention was to return in the evening but due to excessive work they have decided to stay till the land is levelled. Gursharan Singh of village Kapure of Moga told that had previously come to Janian Chahal to plug the Bundh and now when they heard an appeal to level the lands of the farmers they had come with tractors again.
Environment lover Sant Balbir Singh Seechewal told that the work of leveling the lands of the farmers had been started today. He said that the people from different places of Punjab had come with tractors and Karahe so that the farmers could prepare their lands for sowing wheat after the lands are leveled. Sarpanch Jaskaran Singh of Janian Chahal said that sand had spread over 100 acres of land and trenches have also developed on many places. The work on large scale has been started to fill them. 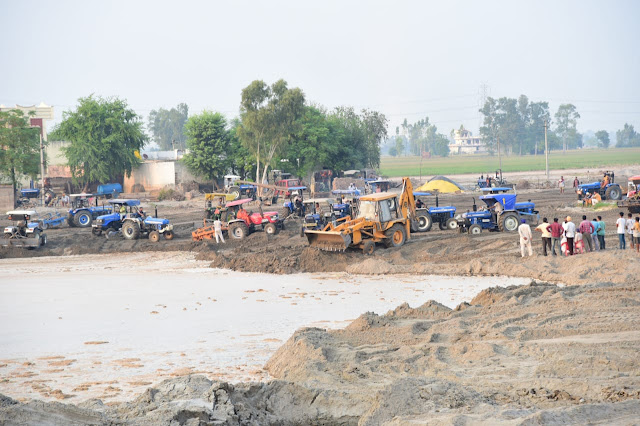