Rupees 50 lac has been spent on diesel till now

Upto 18 ft of soil has been removed at every point

The work of removing the silt upto 15 to 18 ft gathered under the Gidderpindi bridge that has been becoming the big cause of the floods, is going on at war level under the leadership of environment lover Sant Balbir Singh Seechewal. For the last one month by removing silt from the Sutlej river the Dhussi bundh is being strengthened.Till now with the help of Punjabi NRI's and local people diesel costing 50 lakhs has been used. Sant Seechewal ji told that the  Gidderpindi railway bridge on Sutlej river was built by the British about 125 year ago. There are about 21 points through which water is disposed but due to uncleanliness of it 18 points are closed and water is passing through only 3 points.
The main cause of the floods in the month of August 2019 was the silt gathered upto 18 ft under the Gidderpindi railway bridge as the water could  not pass.During floods it was also brought into the  notice of the Chief Minister Captain Amrinder Singh. A project of 17 crores to remove the soil from under the railway bridge was made. 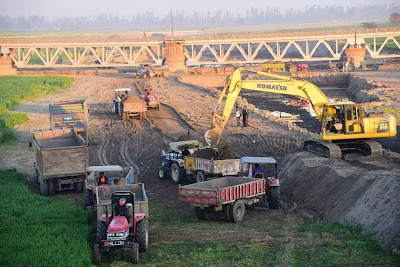 The various meetings in the flood affected villages organised by Sant Balbir Singh resulted in joining of the people to this big work. Three thousand liter diesel since 31st January is being utilised on this karsewa. Sant Seechewal told that 1.75 lac is being daily spent, that includes 5big cranes,2 JCB machines, 10 tipper and more than 80 tractor trolleys are engaged day and night in this project. Dhussi bundh towards Moga and Ferozpur is also being strengthened.That is being supervised day and night by Baba Manga Singh and Baba Kala Singh of Hazoor Sahib with the sangats. On this occasion he said that the flow of river is being diverted to avoid the long distance of the trolleys. Due to initiative taken by Deputy Commissioner Jalandhar Sh. Varinder Kumar Sharma has got the water of Sutlej river stopped at Ropar so that the flow of river could be diverted and brought in the center.