During karsewa in a conversation Sant Seechewal told that during floods in the dozens of villages including Janian Chahal he had seen miserable conditions of the houses,fields,cattles and everything being perished in the floods. The food provider the farmers of the nation had become beggars to get food of two times. God bless it may not happen again. He said that these works are not personal of someone and to accomplish them cooperation of every person is needed. These works are not less than winning a war. Sultanpur Lodhi, 5th March
Karsewa of one of the biggest rivers of India, the Sutlej for the first time, by the farmers of the area ,under the leadership of environment lover Sant Balbir Singh Seechewal is being done. Usually need to clean the rivers running with full flow does not arise but due to callousness being shown towards Sutlej the silt upto15 to 18 ft had gathered below Gidderpindi railway bridge. The rise of soil upto such big extent in the river had become danger to the Gidderpindi railway bridge on Sutlej river. 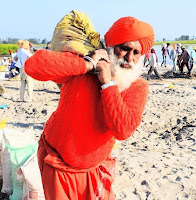 The British made 1912 this bridge due to August 2019 floods had made the railway department officials sleepless because the flood waters had started crossing through the grills of the railway bridge that provide strength to the bridge. If during floods this bridge had suffered any damage then railway would have suffered a loss of billions.
It's worth mentioning that about 30 trains pass over this bridge daily. 16 passenger trains, 10 goods trains and many special trains pass daily on this line. This bridge connects Jalandhar Junction to Ferozpur Railway Mandal. Further this rail way connects North India to Gujrat and Rajasthan So, this bridge is considered very important.
The drainage department  taking in view the danger arisen out of floods had made a project of 17 crores to remove the soil under the bridge. Due to unavailability of the funds with the govt. this work could not be started. Environment lover Sant Balbir Singh Seechewal engaged the farmers of area through a compaign and started the karsewa to remove the soil under the railway bridge on 31st January. Till now diesel costing 56 lacs has been spent with the help of people. 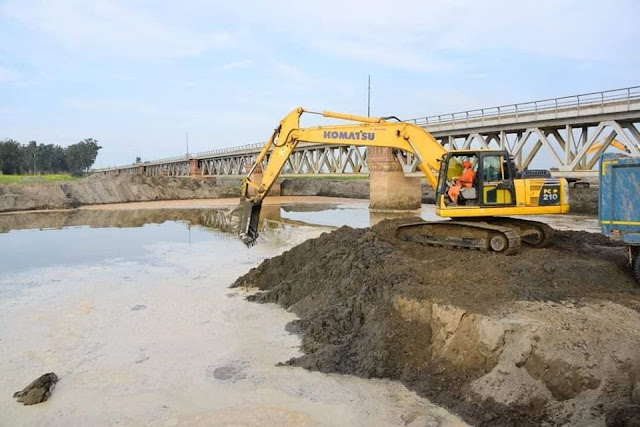 Sant Seechewal told that the soil gathered under the bridge so high that flood water was not passing through bridge properly.The trees swept with the flood were jammed under the bridge and that resulted in breaking the Dhussi bundh on varios points . In this dangerous circumstances the railway bridge had also come under danger.
A farmer Major Singh of Janian Chahal told that he had suffered a great loss due to floods.Upto 25 ft deep pits had developed in their land. Those were filled under the leadership of Sant Seechewal ji and only through karsewa of Seechewal ji we could sow the wheat crop.

Will speed up the work of strengthening the dam: - Sant Seechewal 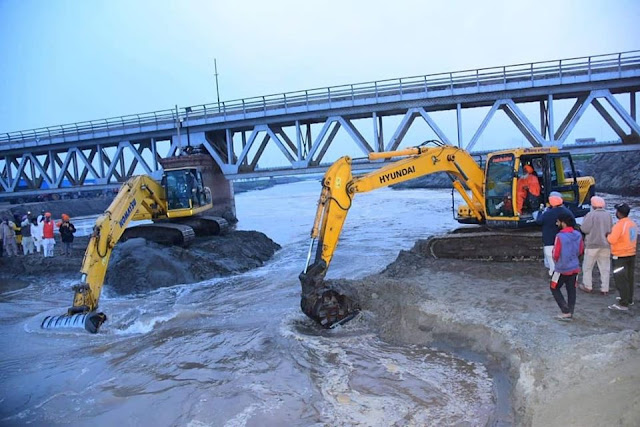 Talking about changing the flow, Sant Sechewal ji said that along with between this flow, the pressure of water on the Dhussi dam will be reduced. The second biggest advantage would be that the tippers and trolleys loaded with mud can climb the Dhussi dam from within the straight river and they will not have to come over the bridge. With this, there will be no traffic load on the road there where will be oil savings. The time taken to move the soil will also take place and work will be faster.