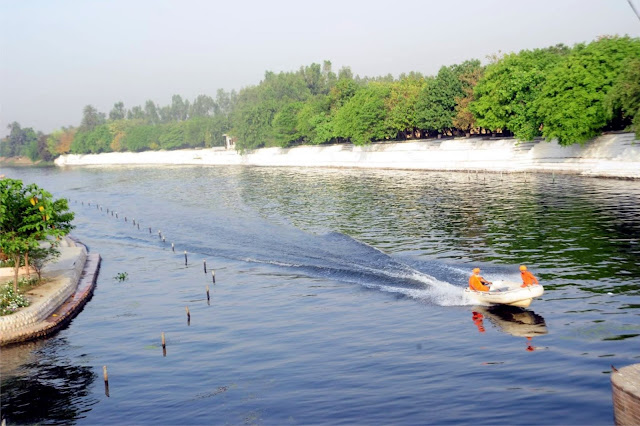 On the completion of 20 years of the karsewa of the Holy Kali Bein a samagam under the pious shelter of Shree Guru Granth Sahib Ji was held at Nirmal Kutiya Sultanpur Lodhi in a simple way. Sangats in the nation and abroad enjoyed the direct relay of the 20th anniversary through social media. On this occasion Environment Lover Sant Balbir Singh Seechewal whereas asked the sangats to abide by the instructions from the doctors and the government to save themselves from corona pandemic there also he thanked the sangats for their selfless service of two decades to bring back the Babe Nanak Di Bein on the map of the world. He said that the government instructions due to corona pandemic were fully observed in the samagam. There was no big gathering as before. It's worth mentioning that in the earlier anniversaries Dr A.P.J Abdul Kalam, Jathedars of Takhats, Chief Ministers, heads of the Shromini Committee and other political, religious and social leaders had been participating in the previous  samagams.

On the occasion of the pious day of sangrand, bhog ceremony of the Akhand path held at Nirmal Kutiya Sultanpur Lodhi and Seechewal in the happiness of 20th anniversary of the karsewa were solemnised. Hazoori ragi of Nirmal Kutiya Bhai Tajinder Singh and the students of Seechewal school connected the sangats with Shabad Kirtan from Gurbani.
On this occasion head of the Punjabi Sath Dr. Nirmal Singh Lambra addressing the sangats said that such miracles in the human history happens seldom, that are limited to some special area, community, nation or religion and breed but show the path of welfare to the whole world. This miracle has been seen by the sangats on the karam bhumi of Shree Guru Nanak Dev Ji in the beginning of the 21st century immediately after the end of the 20th century at Sultanpur Lodhi.
He said that this great work of giving practical shape to the Gurmit Vichardhara of Guru Nanak Dev Ji is the karsewa of the Holy Kali Bein, the people campaign was started on the same day of sangrand of Sawan in the year 2000 exactly 20years before. This karsewa without any government help and only with the blessings of Waheguru and with cooperation of sangats was started. Only in the small period of 20years this task of relief from pollution the 'Seechewal Model' not only for Punjab, India or Asia it has become a guide for the whole nations of the world. The books on this work have been written and in addition to the developed countries it is being discussed in the UNO and in the International Environment Organizations. He thanked on behalf of Punjabi Sathan for completing the work of removing soil up to 12 to 18 ft from under the railway bridge at Gidderpindi in order to maintain the continuous flow of water, as the breaches were developed in the bundh due to last year floods in the river Sutlej.