The campaign of planting of the herbal plants around three railway stations started. 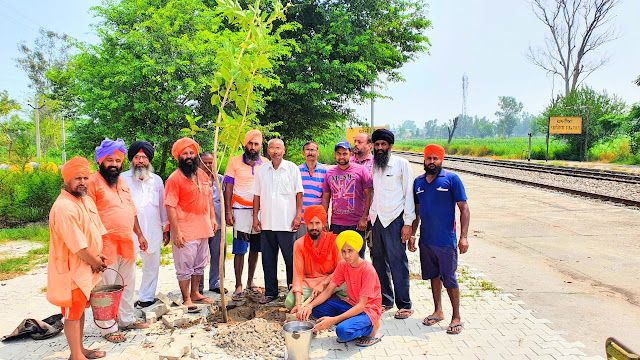 The plantation campaign around the three more stations adopted by Environment lover Sant Balbir Singh Seechewal Ji is going on at war level. Within four days more than 2000 plants of Arjan, Jamun, Nimm, Baheda, Tahli, Toot, Suhanjna etc and of many more breeds have been planted on the vacant places of the adopted railway stations Lohian, Pajian and Dadwindi.
This campaign was started on the day of Sangrand of the month Sawan and is going on continuously. Every day, early in the morning different types of plants are loaded in the trolley from the Sant Avatar Singh Yadgari nursery Seechewal and brought to these railway stations and here with the drill fitted tractor,  holes are dug. Water tank and JCB machine is also brought. 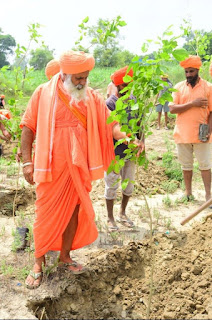 The caravan of the sewadars leave daily for the plantation work around the railway stations. In order to make the land of the Punjab lush green, millions of plants have been planted and distributed by Sant Seechewal Ji during last 20 years. The plants nurtured at the Seechewal nursery, now planted on the main connecting roads to the pious town of Sultanpur Lodhi, on the banks of the Holy Kali Bein, all roads of Dona area and in the hundreds of villages of whole Punjab are spreading greenery. In the year 2014 Sultanpur Lodhi railway station was adopted by Sant Seechewal Ji. Then there in order to solve the problem of the passengers, by spending rupees five lacs, new wash rooms were built on the platform.
35 acres of land around Sultanpur Lodhi railway station had become daldal (marsh). This land has been made pollution free and lush green with the continued karsewa by the sewadars of Sant Seechewal Ji. The only 400 mtr track for the players and various types of fruits, flowers and Ayurvedice plants for medicines are the center of attraction for the passengers. With the installation of two treatment plants the contaminated water of the railway station and of the nearby residents after treatment is used for these plants. Here a nursery is made and the plants are being distributed to the nearby villages free of cost.