The ruling parties with their votes become rulers but nobody come to their help at the time of crisis:- Farmers 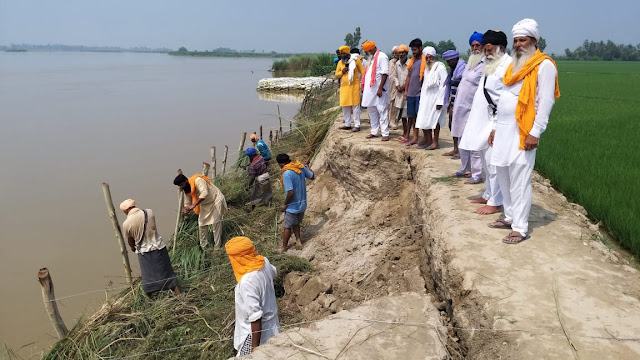 The Beas river is forcing pressure on the advance bundh at three places in the area of Mand.
The farmers are engaged in making it strong.

Sultanpur Lodhi, 23rd July
At the three places in the area of Mand the Beas river is forcing pressure on the advance bundh. That's causing a big danger to the paddy crops of the farmers. In order to strengthen the weakening advance bundh the farmers of the villages are engaged day and night in filling the sand bags This year the first continuous rain of the month of Sawan has increased the level of the waters in the rivers. The pressure at three places the advance bundh is weakening. With the hard work and using the every method the farmers are engaged in strengthening the bundh. Whereas the soil bags being put there also after cutting the grass and sticks and balian from the trees are also being thrown in the river to stop the pressure. 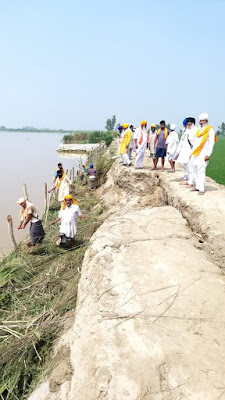 The farmers Kashmir Singh and Shaminder Singh told that in year 2008 Environment Lover Sant Balbir Singh Seechewal by sending a new machine had first time made the base by saving the 12 villages from the floods of the Mand area of Sultanpur Lodhi. At that time by spending 18 lacs from their pockets on diesel, the advance bundh of 11 km on the banks of the Beas river from Baupur to Gude mand was strengthened. The farmers are angry that The ruling parties with their votes become rulers but nobody come to their help at the time of crisis.
Every year the farmers have been spending 5-7 lacs and trying to strengthen this bundh. The villages Aahli Kalan, Aahli Khurd, Bule, Hazara, Chak, Karmuwal, Dhunn, Gude, Fatehwal, Game-Jamewal, Sarupwal, Shekhmanga, Bharoana, Takia etc have been suffering since decades due to floods because of the weak bundhs of Holy Kali Bein and of river Beas. The farmers of the area told that due to the efforts of Sant Seechewal and making of the advance bundhs 15000 acres of paddy crops in the 12 villages between the sangam of the Holy Kali Bein and Beas river was saved. Last 20 years of karsewa of the Holy Kali Bein has changed the picture and destiny of the area.