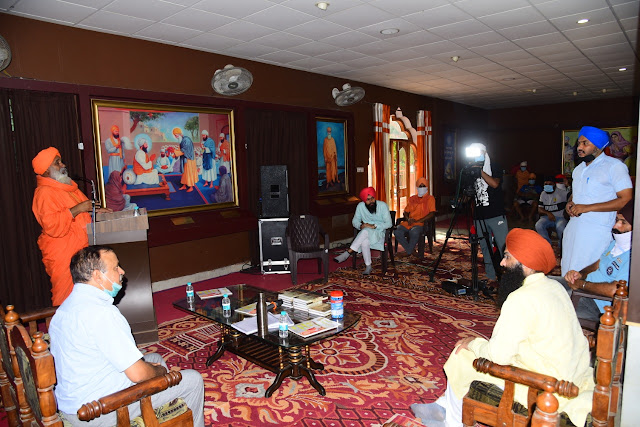 There will be poison free agriculture in the coming times:- Dr. Anuj Sood

In order to make the agriculture poison free and marketing for the crops and to convert it into a profitable business, a training to the farmers was given on the banks of the Holy Kali Bein. Many farmers joined the training camp online and took the information. With the cooperation of Nabard the farmers learned the technique of alternative agriculture during the seminar. Dr. Anuj Sood a leader of the project from Nabard told that from the Indian and Punjab government he has given a detailed information about agriculture schemes to the farmers. Talking on the changing future crops pattern he said that in the past a slogan ' Dab Ke Wah Te Raj Ke Kha' was given to the farmers. He said but now  there is a need to work on the slogan "Akal naal wah te rajh ke khah". Dr. Anuj Sood said that in future training will be given in the group of five farmers of the different villages in the area.

He told that the farmers can sell their crops directly to the market like NEFD, Kisan Mandi, E-Nem, Mother Dairy etc and the crop payments are deposited in the accounts of the farmers. During this training Dr, Anuj told the farmers about the Central government and Punjab government, nabard agriculture schemes in detail and also about the ways of getting profit. He said that in future training will be given to the farmers in the group of five farmers of the different villages in the area.

On the inauguration of the seminar Padma Shree Sant Balbir Singh Seechewal Ji, addressing the farmers said that the brotherhood of the farmers can take them to the new heights. He told them that due to their brotherhood during last 30 years how a revolution came and the people themselves made 800 km roads and made their fields fertile and fruitful. Where there not a single crop was possible now the farmers are getting three crops every year. With the karsewa of the origin source of the Holy Bein. Whereas one lac acres of land has become fertile due to end of sem there also 50 thousand acres of land has become free from the fury of floods. With the flow of water in the Bein whereas the ground water is being recharged there also the farmers settled on the banks of the Bein are using the water for agriculture through motors. More than in 150 villages through Seechewal Model the farmers after treating their contaminated waters are using it for agriculture purpose and saving lacs of rupees of fertilizer and crores of rupees worth of water.