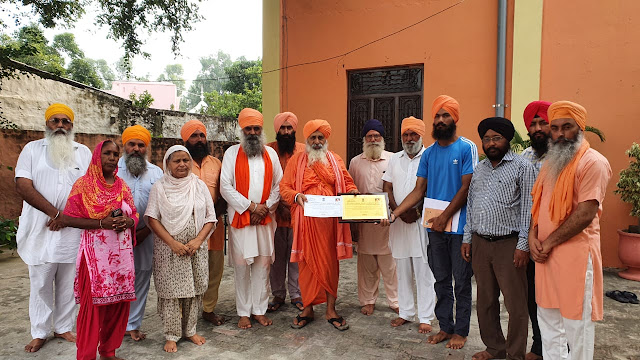 Environmentally famous village gram panchayat honored by Indian government with "Deen Dyal Upadhaye Panchayat Shastrikaran Award". Due to corona pandemic this honour symbol to the panchayat has been sent through post and rupees 8 lac of prize money has been transferred through online by the Central government. On receiving this honour the young sarpanch of the village, Tajinder Singh said that this award is the result of development tasks done in the village during 2018-19.He told that Environment Lover Sant Balbir Singh Seechewal Ji had also been the sarpanch of this village for 10 years and under his leadership the contaminated water of the village after treatment is used for agriculture purpose and the name to this model has been established as Seechewal Model by the Punjab and the Central government. That time also the panchayat of Seechewal was honored with the Nirmal Gram Purskar by the President of India. This is the 2nd National Award that has been given to the Seechewal Panchayat. Sarpanch Tajinder Singh and the members of the panchayat told all the residents of the village are very happy on receiving the 2nd national award. They said that this could only be possible with the capable leadership of Sant Balbir Singh Seechewal Ji and now the village is shining on the world map. The village panchayat and the responsible people of the village congratulated Sant Seechewal Ji.