Sant Seechewal taught the lesson on Environment to Parliament members 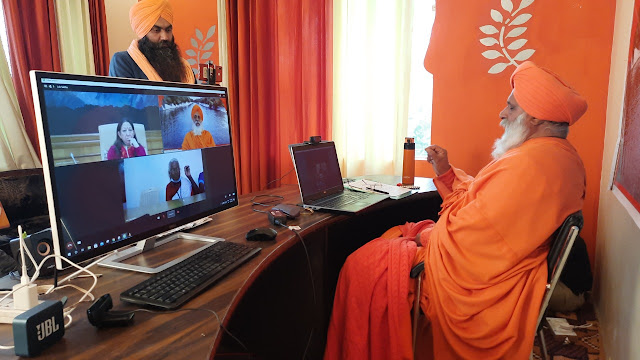 During an online address Kisan's issue was also taken out

During five days online session with Lok Sabha and Rajya Sabha members organized by Online Session Parliament Researcher and Training Institute For Democracy, Padma Shree Sant Balbir Singh Seechewal Ji while sharing his experiences taught a nice lesson to the parliamentarian on environment. This online session was started on 18th January that includes 20 such dignitary who were honored with Padma Shree for their social welfare services in their respective areas. During today's last session Sant Balbir Singh Seechewal whereas talked in detail about Kali Bein, pollution of Sutlej river, cancer hospital of Bikaner and also the works done during floods. This online  session was inaugurated by the Lok Sabha speaker on 18th January. Sant Balbir Singh Seechewal is the first dignitary of Punjab to address this session.

During online address Sant Balbir Singh Seechewal also raised the issue of the farmers. He also discussed the works done for the farmers during last 20 years and said that the country can only be strong and self dependent if the farmers of the nation will survive. He also shared the making of the roads in sand dunes area of Dona, raising of ground water level with the flow of clean water in the Holy Kali Bein and successful experiment of cleaning the contaminated water of villages and cities with Seechewal Model and reusing that water for agriculture purpose. These all works are being  proved profitable for agriculture.