The farmers should return to Natural Farming - Sant Seechewal 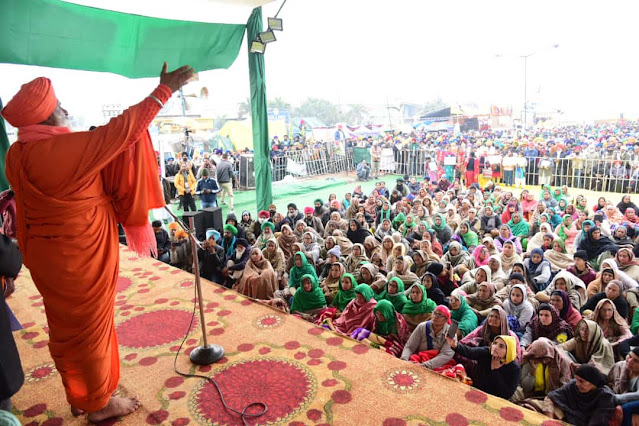 Farmers invited to strengthen the basic structure of Cooperative Field

Environment lover Sant Balbir Singh Seechewal addressing the Kisan Morcha on the doors of Delhi requested the farmers to return to natural farming. On the Singhu border he requested the Kisan Jathebandian to take the initiative and to encourage the farmers to return to natural farming as the governments are not going to form such policies that could return the farmers towards natural farming. Sant Seechewal said that joint agriculture will only be successful if basic structure of the cooperative field will be strong. Mentioning the water crisis of Punjab he said that the farmers of Punjab might have loaded the godowns of the nation with food grains but they have destroyed the ground water of the state. Air and soil of Punjab has been destroyed badly. Cancer is spreading in the villages of Punjab very fast. We can only leave a healthy Punjab for our coming generations if we will adopt natural farming. Shree Guru Nanak Dev Ji during his last times did the farming, that was also the natural farming. Without returning to that farming Punjab can't be healthy. He said that there is a great demand for the organic commodity and their market rates are three times more.

He requested the Central Modi Government to accept, without any delay the demands of the farmers sitting on the doors of Delhi, as they are attracting the world media. He said all the three agriculture laws as per farmers demands should be cancelled immediately. Sant Seechewal said that the last two days rains has boosted the enthusiasm of the farmers much stronger. On this occasion he distributed 200 canvas (tirpals) to the farmers sitting on strike to save them from rain. He also gave 10 quintals of moongfali (peanut) and other commodity for the langars going on since 25th November.

Indian Farmers Union President Doaba Manjit Singh Rai, Kirpal Singh Musapur, Darshan Singh from Kankhal, Davinder Singh Bajwa, Surjit Singh Shantti, Gurdip Singh, Paramjit Singh Bal, Satnam Singh Sadi, Amrik Singh Sandhu, Jasvir Singh, Gurpreet Singh, Daljit Singh and other sewadars were also honored. On this occasion farmers of those villages also accompanied Sant Seechewal whose crops were destroyed in the floods in August 2019 when the bundh of Sutlej river was washed away. The farmer Kulwinder Singh told that washed away bundh had caused a great destruction at Janian Chahal and that was rebuilt under the leadership of Sant Seechewal Ji by the youths and sangats of the area within very short time.