2nd round of karsewa to clean the bottom of Sutlej river starts:- Sant Seechewal 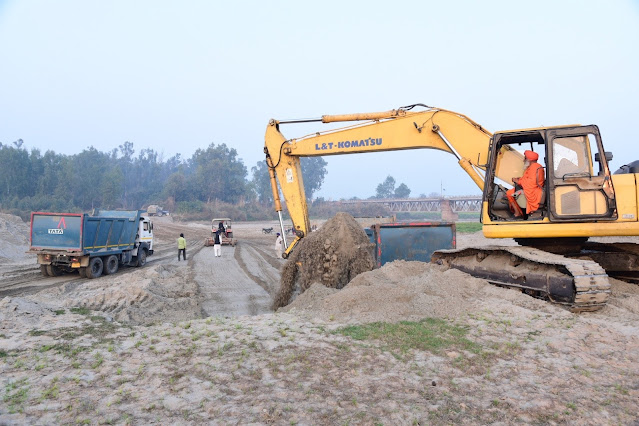 Joint places of the villages being rejuvenated with the removed soil from the gates of Gidderpindi Bridge.

Renowned Environment Lover Sant Balbir Singh Seechewal has restarted the second face of the karsewa of cleaning the gates of Gidderpindi bridge, made over the Sutlej river, that is known as the life line of Punjab. During 2020, with the consent of railway department and DC Jalandhar, day night karsewa to clean the gates of Gidderpindi Bridge was started. Due to accumulation of soil under the bridge gates in decades, capacity of passing of the rainy water had lessened, that became the cause of floods in 2008 and 2019 and those caused a great destruction in Lohian, Sultanpur Lodhi and Shahkot area. Due to rise in the bottom of the river, accumulation of the soil in the gates, weakness of the bundhs and illegal possession in the river on large scale, the people of dozens of villages have to face the problem of the floods. That caused millions of rupees of loss to the people and also a set back in progress as compared to common people.

To strengthen the bundhs of the river, there has been no shortage of the funds in the papers of the governments but due to mental pauperism, these funds are never used properly. Due to which the people living near the rivers are compelled to live miserably. Neither the grants of millions are received nor the basic needs of the people are taken care of. It's said if the God favors then all is well, "Je Karta Vall Tan Sab Kuchh Vall", accordingly whenever there has been a crisis in Doaba, with the blessings of Guru Nanak Dev Ji, Sant Balbir Singh Seechewal Ji, becoming a ray of hope for them has always come forward as a Messiah and has taken their problems on his shoulders and to take them out of these problems has served them with the cooperation of the people. Its fresh example is the karsewa of Sutlej river. Flood came, bundh was washed away, people stranded homeless and were yearning for bread and water, then Sant Seechewal came forward and fulfilled their needs. To strengthen the broken bundh there was no such district from where the youth had not brought the tractor trolleys full of soil. When the cause of flood was found, then to remove it, during corona tenure from January to August Sant Seechewal with the cooperation of the people strengthened more than 50 km of bundh with the soil that was removed to clean the 13 gates of the bridge. Millions of rupees historical task without any grants were done with the people's machinery and with the financial aid from the NRI brothers. 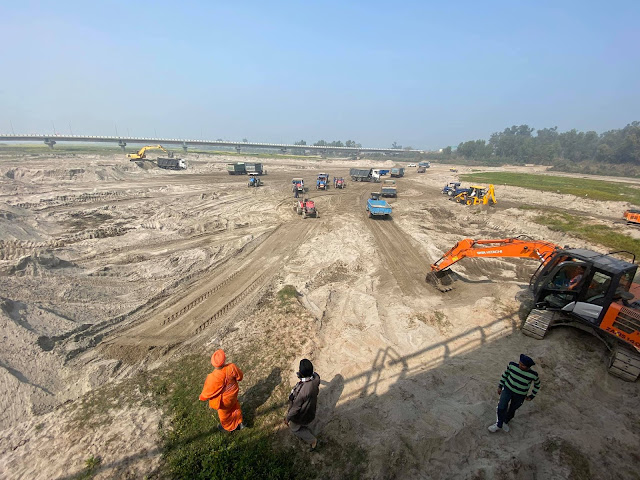 During second round of karsewa, whereas hard work to clean the remaining gates of Gidderpindi Bridge is being done there also the joint places of the area are being rejuvenated with the soil. The people of Gidderpindi told that wheres Baba Ji has strengthened the bundhs with the spare soil of the river there also our stadium, built-in two acres, is also being raised by 4ft, so that it might not be filled with rainy waters to avoid any obstacle in the players practice. With it on the banks of the main road, two acres of old pond is also being converted into a park. More than 15 ft of soil is being put in the pond to make the park. Till now more than 1000 tiper soil by 13 tipers has been put on the joint places of the villages.Till now soil of more than 50 lacs has been put.

They said that if Sant Seechewal Ji had not been circumspect in doing these works, none would have given us such grant. Our village is being rejuvenated with the karsewa. With a cult many works are being done. We're being saved from floods and our surroundings of our villages are also being made beautiful. It could become possible only with the courage of Sant Seechewal Ji and with the cooperation of NRI brothers of the area. During second round of karsewa 12000 ltr of oil has been used till now. That includes 3 big machines, 2 JCB and 13 tipers are engaged day and night in the karsewa (Ek Panth Anek Karaj).