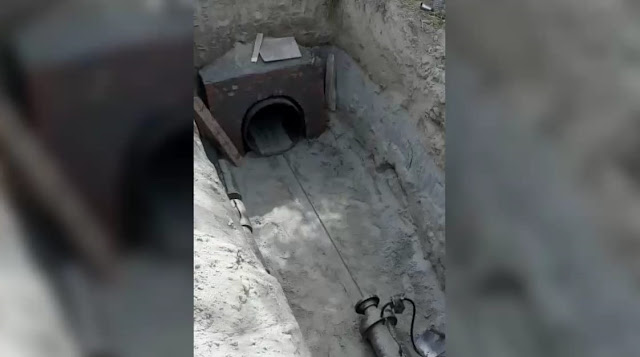 1974 Water Act is being torn apart in Punjab

Water is life or without water we cannot imagine life on the earth. These things are true to the ears but the government officials are doing adverse to it. The Chief Minister of Punjab and the Prime Minister of India are making the people aware of the water crisis but the Babu (officials) are so powerful that they don't even care for anyone. The Prime Minister during 'Man Ki Baat' has given stress on to preserve the rain waters. The Chief Minister of Punjab is assuring to not to waste even a single drop of dirty water of villages and cities but adverse is happening to his hopes. It's a big disaster. If we talk about Sutlej River, its condition has become very miserable.

The poisonous and contaminated waters of Buddah Nullah of Ludhiana and Chitti Bein fall in the waters of Sutlej River and has already made its condition pitiable. Now in order to put contaminated water of Shahkot town after treatment, in the Sutlej River, Dhussi Bundh has been broken. 8.5 km long pipeline has been put to throw the contaminated water of Shahkot Town in the Sutlej River, means the government has burnt millions of rupees to play with the people's lives and to throw them in the mouth of dangerous diseases. A lot of litter of Buddah Nullah and that of Chitti Bein is already being thrown in Sutlej River that its water has gone B grade from A grade, means the most polluted amongst all.

A new 3 MLD capacity treatment plant has been made for treating the contaminated water of Shahkot Town.8.5 km long pipeline has been installed to put its over flowing waters due to rains in the Sutlej River. The work is going on at full speed to pass this pipeline under the Dhussi Bundh of the river. Last touch is being given to the work of putting the overflowed water of the treatment plant made by Nagar Council Shahkot, in the Sutlej River. It's worth mentioning that during Budget Session a committee of legislators was made to give report on Punjab waters within two months but despite of it the government officials are engaged in polluting the Sutlej River at war level. It's the responsibility of Punjab Pollution Control Board to save the waters of the rivers and streams from being polluted but it has badly failed. To stop the contamination from throwing in natural resources of water, 1974 Water Act is made.

Punjab Pollution Control Board and NGT Monitoring Committee member Sant Balbir Singh Seechewal telling the instance of putting the water of the treatment plant in the Sutlej River Shahkot Nagar Counsil as serious, said that the ground water in Punjab has already gone deeper if the river waters are not controlled then the condition of Punjab will go worst. Sant Seechewal said that he will take this matter in the PPCB and Monitoring Committee meetings. Treated water of the treatment plant should be used for agriculture purpose. Sant Seechewal Ji straight forwardly raising a question said that the officials have now enforced the Water Act made in 1974 in 2021.

If the officials rather than using the powers given in the constitution have badly failed to exercise them to stop the contamination falling in the rivers and streams then why can't they put the water of the Shahkot Treatment Plant without treating. If the proper action had been taken on breachment of 1974 Water Act then the Sutlej River had not been polluted today.

Aam Aadmi Party legislator Kultar Singh Sandhwan making a positive effort has made a complaint to the Central Pollution Control Department Delhi to stop the Shahkot contaminated water from falling in the Sutlej River and has atleast tried to stop it. On this occasion Garhshankar Legislator Jaikishan Singh Rorhi and Ropar Legislator Amarjit Singh Sandoa were also present with him.