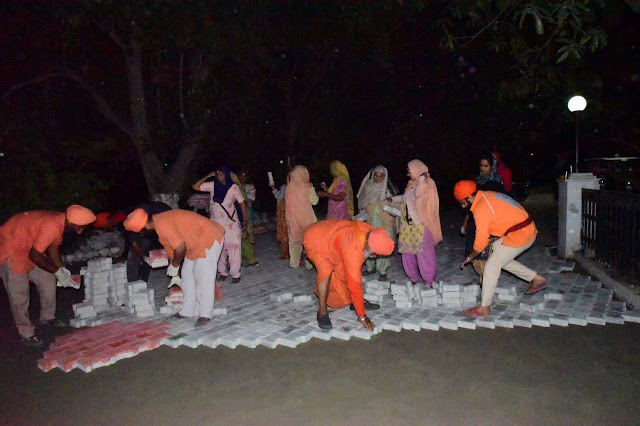 In order to embellish the look of Holy Kali Bein, Karsewa to install the Interlock tiles on the banks of Holy Kali Bein is going on continuously. The beginning of this karsewa was done by  Environment lover Sant Balbir Singh Seechewal Ji and other Mahapursh  with the Jaikaras Bole So Nihal on the Prakash Purb of Shree Guru Nanak Dev Ji in 2019. Sant Seechewal Ji and the sewadars are engaged day and night in installation work of Interlock tiles on the paths of the Bein and to make them beautiful. Interlocking work from Rest House Mafia to Gurdwara Sant Ghat Sahib has been completed.

Sant Seechewal Ji told that sangats from Nation and abroad are contributing to this work of installation of Interlock tiles. He thanked the sangats and said that the sangats have never made us feel any type of shortcomings for the last 20 years of karsewa of the Holy Bein. Where on one side the sangats from villages are engaged in manual work on other side NRI Punjabi brothers living in abroad have fully supported us financially and emotionally.

It's worth mentioning that when the state government in 2019 during 550 th year samagams, grills on the banks of Bein were installed by spending crores of rupees, and paths of the Bein were dug and destroyed. Whereas with the carelessness of administration officials, the sangats had to face the problem of walking on the paths, there also water supplying pipes were also destroyed and electricity supplying piture globes were also damaged. The sangats have been facing this crises since long time. Now with the cooperation of the sangats, the repair work of the paths is again being done, plant beds are being made, new water pipes and electricity pipes are being put to restart the water and electric supply. Whereas the nation and abroad sangats are contributing financially there also sewadar Gurdip Singh, Satnam Singh, Kuldip Singh, Amrik Singh, Daljit Singh, Sukhjit Singh, Varinder Singh, Manjinder Singh, Amritpal Singh, Tejinder Singh, Chanpreet Singh, Tarlok Singh, Gurpreet Singh, Jagdeep Singh, and Sant Avtar Singh Yadgari College students and other sangats from villages are contributing manually in this day -night karsewa.