Education is only such medium that can contribute to the development of the state in a big way:- Sant Seechewal 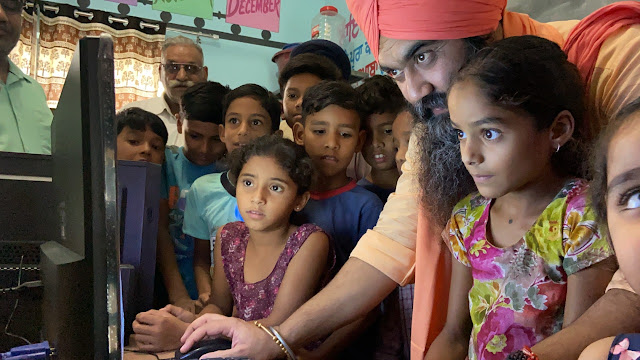 Till now "Drishti Panjab" has donated 20 computers in Punjab

Along with computers herbal plants were also planted in the schools

With the Inspiration of Sant Seechewal Ji a campaign to strengthen the education structure in Punjab is going on.

In the Kandi area where computers have been installed are Govt Middle school Mussa Pur,Saini Majra,Jhandian Kalan, Sarthali and Azampur.On this occasion the teachers of these schools and the responsible dignitaries of the villages whereas thanked the Drishti Foundation Canada there also they also thanked Environment Lover Padma Shree Sant Balbir Singh Seechewal Ji and said that it's his farsighted thinking that the computers are being donated to the backward areas of the state where none has ever cared for any such thing.

Sewadar Gurwinder Gurwinder Singh addressing the small gathering in the schools said that the people of Punjab are going away from their heritage and culture. They should not forget the rich heritage of Punjab. He said that these are the words of Sant Seechewal Ji that education is the only medium that can contribute to the development of the state. Sant Seechewal Ji with the cooperation of the NRI brothers has been  working continuously to make the needy children of the state self dependent in the field of education, sports and employment since 1999. Drishti Foundation for the last 8 years is also engaged in to give positive direction to the children and youths of the state to make their future bright with the Inspiration of Sant Seechewal Ji.