In the race of earning money in Punjab, the Education structure is going on destruction:- Boparai

Till now 25 computers have been donated by the Drishti Punjab

After the areas of Malwa and Kandi, 'Drishti Punjab' has donated computers to the government schools of 5 villages of Border areas of Majha. This campaign with the Inspiration of Environment Lover Padma Shree Sant Balbir Singh Seechewal Ji, has been started by the Canada resident advocate Harminder Singh Dhillon. So far ' Drishti Punjab' organization has donated 25  computers in the state. Under this campaign a target of donating 51 computers upto March 2022 has been fixed.

This campaign's Punjab Incharge Gurwinder Singh Boparai informed that during sixth session of Drishti Punjab, five computers have been donated to the Amritsar district villages Chavinda Kalan,Vaniake, Tapiala, Bhaaini, and Road Khehra village government schools. He said that till now 25 government schools of Abohar, Fazilka, Malout, Ropar and Amritsar districts have been provided with the computers by the organization. During next sessions Hoshiarpur, Gurdaspur, Pathankot, Ferozpur and others districts needy schools will be provided with the computers under this campaign. Drishti Punjab along with donating computers to the government schools has been giving stipends of r/s 50000 to the students of the government schools who stands first in the 10th class for the last 8 years. The organization is going to start a project to establish a library in the government schools of Punjab. Contacts are being made with the libraries being run by the Punjabi's in the whole world, concerning digital libraries so that the treasures of books is brought on one stage.

At village Tapiala Government Girls High School under the leadership of the Deputy D.O Amritsar Harbhagwant Singh, the principals of schools of 3 blocks gathered and addressing these education officials Gurwinder Singh Boparai said that the motive of the Drishti Foundation is this that in modern era, the needy students of Punjab could get modern education and this is a dream of Drishti Punjab. He said that during the rule of Maharaja Ranjit Singh Punjab was on the top in the field of education in India. He said that in 1809 Maharaja Ranjit Singh had decided to give education to every child and old person in  Punjab and in 1830 every child of Punjab was getting education, whereas England had made children education act in 1870.

Boparai told that now the education structure of Punjab, in the race of earning money is under destruction and education is beyond the reach of poor people and in Punjab education is in the hands of strong education mafia. He said that nurseries are being run free of charge in order to make Punjab lush green. Where anyone can take plants free of charge by downloading 'Rukh' App. 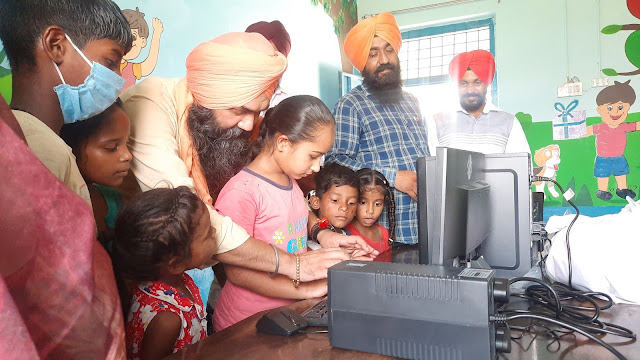