The Beas river has attracted the attention of the whole Punjab but this act is going on in the Sutlej river daily... 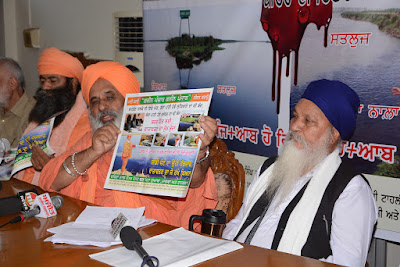 Under the leadership of environment lover Padamshree Sant Balbir Singh, the  saints, the  greatmen, the environment lovers and leaders of social welfare organizations have demanded the Punjab govt. to issue  white paper on the miserable condition of the waters of Punjab rivers. Sant Seechewal while addressing the press reporters said that baggase (seera) disolved  in Beas river waters has caused the death of the fishes of different species and other water creatures on large scale. Now   there sacrifice should not go unnoticed and also the Govt. should issue white paper on the rivers and drains about the fall of contaminated and poisonous waters and the persons responsible for making the water resources poisonous should be brought in the notice of the public. Water Act 1974 is being violated openly but no solid action is being taken against anyone person.
He said that incident of mixing Seera in the Beas river has attracted the attention of the whole Punjab but this act is going on in the Sutlej river daily. Now there fishes are not dying because all type fishes have vanished from the Sutlej water . 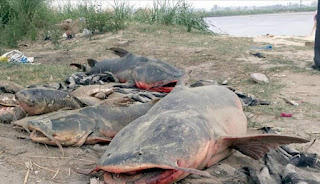 He said that the people of conscience minds should come forward to condole and condemn the death of water creatures. He added that govt. officials who had been careless in stopping the contaminated waters and the person responsible for the death of the water creatures should be prosecuted. The persons who have been affected by the contaminated and poisonous water should be compensated. A fresh survey should be made to notify the cities, the towns, and the villagers whose contaminated waters are being fell in the natural water resources and the person responsible should also be notified.
Waters of Ludhiana corporation and factories poisonous water are continuously being put in the Sutlej river which meet near Balipur. In this village many cancer deaths have been caused due to poisonous water same way the Chitti Bein Merges into Sutlej river near Shahkot area. The poisonous water of Kala Snaghian drain, Jamsher drain and Phagwara drain fell into Chitti Bein,  the poisonous water the fell in Sutlej, river are causing cancer and black jaundice to the people of Malwa area. He said that the working of the treatment plant at Jalandhar and Ludhiana is not satisfactory. Refering to Bi-election of Shahkot Sant Balbr Singh Seechewal said that this area is suffering due to poisonous waters of Sutlej, Chitti Bein and Kala Sanghian drain. He advised the people to vote for that candidate who gives surety to clean the water resources of the area. 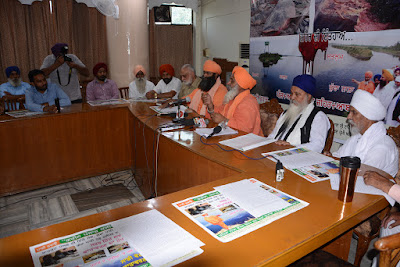 Harike Pattan where Sutlej and Beas rivers meet there two canals begins. One goes to Rajasthan and other goes to Malwa. The canal covering 1000 K.M to Rajasthan is flowing with poisonous waters and the people of 8 districts of the area are directly drinking this water. In the year 2009 an Awareness March from Sutlej, Kala Sanghian drain and Chitti Bein was taken upto Bikaner area of Rajasthan. There is not any treatment plant in that area. People are using this water for drinking which is full of deceases. On this occasion Sant Balbir Singh Seechewal, Sant Daya Singh of Gurdwara Tahli Sahib, Sant Gurmej Singh of Gurdwara Saidrana Sahib, Sant Sukhjit Singh Seechewal, Capt. Sarabjit Singh Dhillon of Chogrida committee, Ram Singh Insaaf, Bahadur Singh Sandhu, Amrik Singh Sandhu, Gurwinder Singh Boparai, Jasbir Singh and other reputed person were also present.