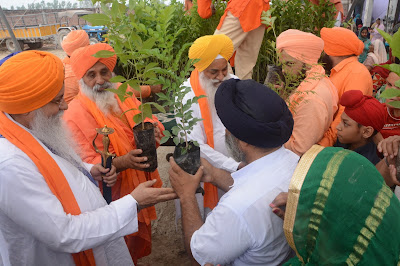 The Jathedars of two Takhats distributed plants as Prasad. 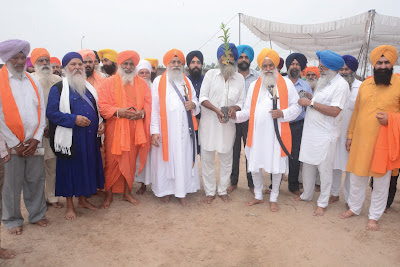 Addressing the Samagam environment lover Sant Seechewal said that the waters of the Punjab’s rivers have become polluted. People are dying of cancer. The youth of Punjab is becoming prey to chitta (drugs). This is all  due to the worsening condition of environment. He appealed the gursangats to take pledge to make the Punjab free of pollution and drugs upto Prakash Purb of Guru Nanak Devji in 2019. He said if the youth of Punjab is saved only then Punjab will survive. On this occasion head Sewadar of Gurdwara Gurusar Sahib Saiflabad had especially come. He also appealed the gursangats to plant  more and more trees and to take care of them in the rainy season.

Jathedar Akal Takhat Sahib Giani Gurbachan Singh expressed worry over worstening condition of Punjab‘s environment and said that water and air of Punjab are under crises. The religious leaders should come forward to save them. He praised Sant Balbir Singh Seechewal as he is engaged in saving the waters from pollution; he asked the gursangats to join hands with Sant Seechewal. On the occasion of distribution of plants, Mahatma Muni from Khaira Bet, Sant Amrik Singh  Khukhrain from Dera baba Harji Sahib, Baba Baldev krishan from Baba Di Mehar Kutiya Gillan and other religious dignitaries were also present. It is worth mentioning  that for the last 6 years the plants from shrimaan Sant Avtar Singh Yaadgari nursery situated at Nirmal Kutiya Seechewal are being  sent continuously to Gurdwara Tahli Sahib . These plants include common plants like Sheesham, Jamun, Neem, Mangoes, Guava, Bilpatra, Din ka Raja, Raat Ki Rani, Almond, Tunn, Chandani and other shaddy plants and Flower plants.