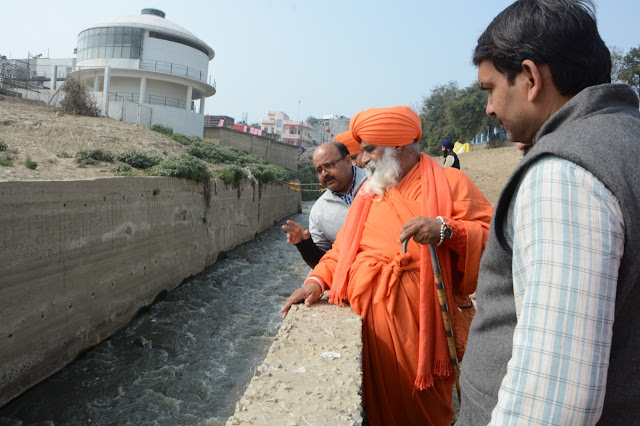 IIT Director let it known to Sant Seechewal about the condition of the ponds and rivers.


The youths of Jan Andolan are fully engaged in saving the ponds
Illegal encroachment on the ponds and rivers is in abundance
Sultanpur lodhi, 20th February
The condition of the small rivers of the area of Banaras those merge in the Ganga is quite pitiable. Varna and Assi rivers merge in the Ganga, their waters are badly polluted. Whereas Varanasi city was named after these rivers. IIT Director of Banaras Hindu University Dr Prabhat Kumar and Lalit Malwia and Kupinder Tiwari who are running a Jan Andolan to save the ponds of Banaras city informed Environment lover Sant Balbir Singh Seechewal about the condition of the Varna and Assi rivers.
Lalit Malwia and Kupinder Tiwari who are running Jan Andolan told that in  the religious granths of the historical city Banaras it is mentioned that there were 155 ponds in the city. But according to the record of the Nagar Council only 80 ponds are left. Most of those have vanished to the political encroachment. The persons who are fighting to get these ponds relieved from illegal encroachment are facing more than 12 false cases.
IIT Director Dr Prabhat Kumar told that till now the government has spent 200 crores to save Verna river, with it the banks have been made strong and beautiful. Sant Seechewal after seeing the condition of the rivers said that before beautifying the banks there is a need to enforce the project of stopping the fall of contaminated waters in the rivers. Sant Seechewal along with these two rivers also visited the 8 ponds whose condition was quite miserable. He said that the Holy Kali bein that is also mentioned in the history, this rivulet has the honor of the touch of the pious feet of Baba Nanak. The contaminated waters of the villages and cities were also falling in it but when the Jan Andolan was started and pressure was made on the government to install treatment plants to stop the contaminated waters from falling in the river and this treated water should be used for agriculture purpose. On this occasion along with him was Sant Daya Singh Ji of Gurdwara Tahli sahib, Ex DGP of Uttar Pradesh R N Singh, Sanjay Gupta of Indore, Anurag Ohri, Gurwinder Singh Boparai, Vikas Singh, Amit Singh and R N Shukla and other experts were also present.