After making the Kali Bein clean, now it's the turn of Sutlej:- Sant Seechewal 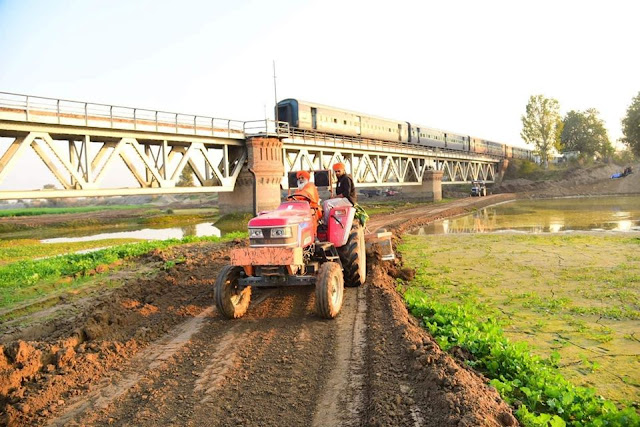 After making the Kali Bein clean, now it's the turn of Sutlej:- Sant SeechewalFlood of sangats gathered to clean the Sutlej river

Environment Lover Padma Shree Sant Balbir Singh Seechewal having cleaned the Holy Kali Bein with the cooperation of sangats said that now it's the turn of the Sutlej river. That with the cooperation of sangats will be cleaned by all means and its natural flow will be restored and now the sangat is fully engaged in this work. Yes, now after Kali Bein Environment Lover Padma Shree Sant Seechewal is fully engaged in cleaning the Sutlej river underbridge at 21 points where the floods have done destruction.
The special about it is that everyone is fully engaged in this karsewa that was started by Sant Seechewal on his birthday, so that the floods may not force any destruction in the future. Before it Seechewal has pledged to make the village Janian Chahal Baandh strong. To make the bundh strong and to travel 50 km is not an easy job but when Sant Seechewal Ji makes up his mind he doesn't take rest till that work is completed. The level of the soil under the railway bridge had gone so high that one could touch the bridge easily by standing on it but as the karsewa is going on the distance is increasing day by day. With the help of JCB machines soil is removed and with the help of tractors and trolleys the soil is put on the bundh, so that it is strengthened. It is worth mentioning that Sant Seechewal after doing the various meetings with the farmers of the adjoining villages has started a campaign that in future will save the lives and properties of people and also government money. The target is to make the 50 km long bundh strong and to clean the river. Sant Seechewal said that to save the Flood Victims from further troubles the old methods will have to be changed then only we could be able to save them from struggle and make our state prosperous. He said that the capacity of the rain waters in the rivers and rainy drains will have to be increased, this is not only the work of the government we all should participate in this work and we should take the command in our hands to clean the rivers and drains. Gurbaani is teaches us to understand this.
He said that the NRI brothers can play a big role in Saving the Punjab environment, some of them are already contributing at personal level for Punjab but I think everyone should come forward for the welfare of the people, only then the results would come. He said that the people are cooperating for cleaning the river and making the bundh strong. He made an appeal to contribute towards the cost of petrol for the machinery being used for the work. If we have a look on the works done till now a temporary bundh has been made for the cleanliness of the river Sutlej. The soil removed from the Dhussi Bundh is being used to make the weak points strong. Along with the cleanliness of the river we can now have a clear glance upto distant areas.
The residents of about two dozen villages are taking part in the cleanliness of Sutlej : As per information the sangats of two dozen villages are taking part in the Karsewa started by Sant Seechewal Ji. This includes karsewak from Seechewal, Rajewal, Bahmanian Janian Chahal, Janian, Mehrajwala, Chakbundala, Fatehpur, Gattiraipur, Gatti Peerbaksh etc.