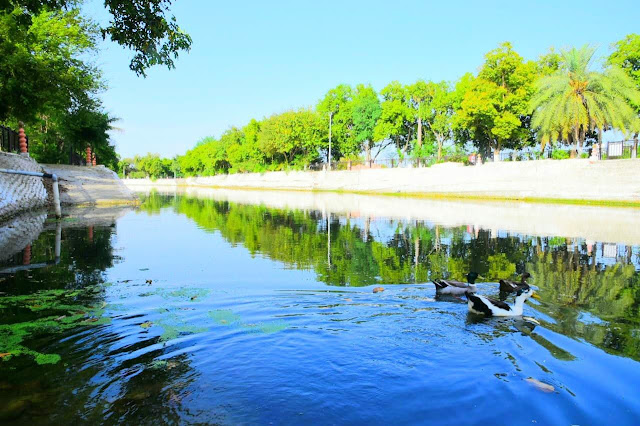 Fifth of June is celebrated every year internationally as World Environment Day but it’s celebration in the year 2020 holds special significance as the world is engulfed in a struggle against Corona Virus.  Even the most powerful nations are helpless and have succumbed to the invisible virus. During the pandemic, when most nations implemented strict lockdowns, the planet Earth witnessed such acute reduction in pollution which seemed to be beyond imagination.

Many of the polluted rivers in India also saw visible reduction in the pollution levels. This includes the river Ganga, the cleaning of which involved spending thousands of crores of Rupees. The lockdown due to coronavirus,revitalized the rivers. The Himalayas were visible from Punjab again. After 40 years, the Dhauladhar range could be seen from the state. All this pollution was self-inflicted by humans.

Followers of Guru Nanak Dev, settled across the world had celebrated their Guru's 550th birth anniversary last year in 2019. It was Guru Nanak DevJi who, through his Bani, gave the message of sustainability for men to live in harmony with nature, of which still no parallel can be found. In ‘Japu(Ji)’, the first composition ofSri Guru Granth Sahib, is present a permanent solution for the global warming crisis. It is just a matter of time when the world will accept this resolve. To cool down the planet, the seven words of the first verse need to be invoked;

‘Air is our Guru (teacher), Water is the Father, and the Earth is the Great Mother of all'

These seven words of Guru Sahib’s Bani also contain the eternal truth of the universe. In these words, air, water and earth are considered as guru, father and mother respectively. No one living in this world is oblivious to these words. If we can’t even comprehend such pervasive words, how can one be in communion with nature? It is not only for the present generation to reconnect with nature but we also need to inspire the future generations to do the same. It was Guru Nanak DevJionly,who, while challenging the pride of Bali Kandhari gave the message that everyone has the right over waters. This message of the Guru is implied to all those who seek hegemonic control over water resources.

It has been more than four decades since 1974 that the environment day is being celebrated internationally. In the last 46 years, in the name of 'development,' maximum exploitation of the natural resources occurred. Human greed has caused blind destruction of hills, forests, rivers and other natural resources. This greed has widened the chasm between humans and nature. As this gap keeps widening, humans keep accelerating their activities against nature. The human greed has reached such an extent that it has swallowed forests, mountains and rivers.

The increasing temperature, known as Global Warming, has become a challenge for the whole world. The United Nations has been continuously asking to reduce the increasing pollution in the environment by bringing all the countries together on a single platform. All the countries have responded positively to this call. But the way America has withdrawn from the Paris Agreement, it is very unfortunate. The corona virus pandemic has shown a reduction of more than 20% of Carbon Dioxide. In India we have The Water Act (1974) which was brought to save and take care of the natural resources of water. But even this is not being implemented effectively.

God resides in nature. God can only be seen by becoming one with nature, but we, claiming to be the literates of the 21st century, with a scientific mind, are doing inhuman things and going against nature.

Since July 2000, people have regularly done voluntary labor (KarSewa) for the holy river, Kali Bein,Sultanpur Lodhi, Punjab where Guru Nanak Dev Ji attained enlightenment. The Bein, cleaned with the collective efforts of everyone, has set a precedent. The full significance of the line from Gurbani ‘With our own hands, let us resolve our own affairs’ -

The Holy Kali Bein once again flows clean. The beginning from the home of Guru Nanak Dev has given a direction for cleaning the rivers and oceans of the whole world. The world has seen all the rivers-oceans flowing clean, including Ganges, during the lock down. This incident has also made it clear who is poisoning the natural sources of water and who is not upholding their constitutional responsibilities.

Let us adopt the changing lifestyle of the world due to corona virus. Let us stop the flow of filth in the rivers and oceans. Let us plant more and more trees to make the Earth breathable and liveable for our future generations. We can overcome corona virus only when we create a clean environment on Earth.