Why every time, the litter comes in our share? 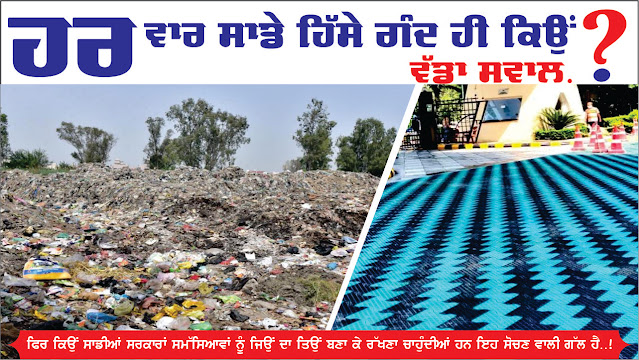 Why every time, the litter comes in our share?

It's a big question!

These two pictures, shown to you, the first picture is of the litter giving foul smell, in the area of Shahkot. You may not feel the foul smell in the picture but just imagine that the political leaders who give assurance of cleanliness to the people during elections, do you ever ask them such questions. Perhaps not. With it the second picture is of Coimbatore city of Tamilnadu, where the farsightedness thinking of Dr. Shantnu, interlock tiles have been made from the litter. Isn't this a matter of wonder.? The litter that was a thing of disgust has become a source of development. On side the litter was finished and the separate need for grants are also not required. But, who listens to such good people. This has now become a matter of worry for the society. Governments and administration are only worried about filling their stomachs with money. If such projects are started in every district of Punjab then the litter of villages and cities will be controlled and that will also be beneficial, as on same pattern interlock tiles can be made from it. Not only interlocks but from this litter sitting benches, tables, pots and many more things can be made from this litter.

It's a matter of thinking that why our governments want to keep the problems as they are.

During present Nagar Nigam and Nagar Councils elections, issues of cleanliness of cities remained missing and dirty politics remained in force. The winning candidates spent lacs of rupees going beyond law and their capacity, but none of the parties made any plan to lift the garbage heaps from the surroundings of their cities or to control it properly.

Even after 72 years of Independence they could not provide the people of the nation, a relief from the litter. Elections have been held 17 times in the nation. Our rivers and streams are going dirty and same way our cities and villages are also becoming dirty. Then what type of praises of development we are singing or listening since long period. There is no clean drinking water for the people, foods are becoming poisonous and it has become difficult to breathe in the polluted air.

Let's clean our surroundings with our own efforts and beautify the future of Punjab!

Let's create environment worth living for the birds and animals.

Let's be the real followers of the teachings of Baba Nanak! 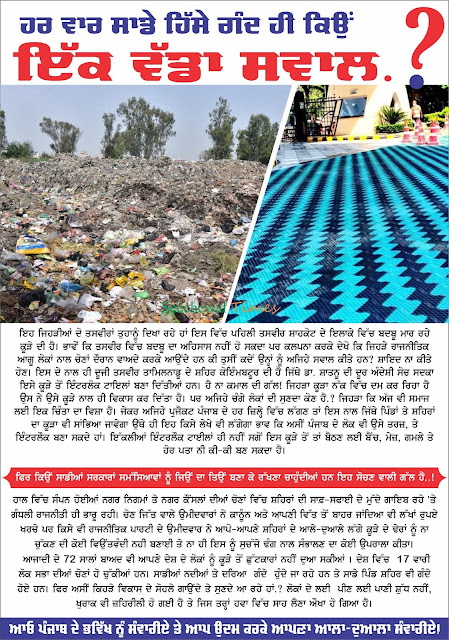