A call given to save water resources of the Nation

To celebrate 150th anniversary of Mahatma Gandhi in a strange way, Nitin Shrirang Sonawane, with a message for World Peace and Friendship, on a World Gandhi Peace Walk, was today honored by Environment Lover Padma Shree Sant Balbir Singh Seechewal Ji at the Holy land of Sultanpur Lodhi. He had started his journey of world peace in 2016 and till now he has travelled about 46 countries either on foot or on a bicycle. Sonawane met Sant Balbir Singh Seechewal Ji near Gurdwara Ber Sahib Ji, where Sant Ji along with his sewadars was drawing out the hyacinth from the Bein, Sonawane praised Sant Seechewal Ji for his struggle to save the waters of the nation. Sh.Sonawane had started his worldwide journey on a bicycle on18th November 2016 from Gandhi Ashram Sewagram Vardha with a message of nonviolence and peace.

Till now he has travelled to 46 countries of the world on a bicycle or on foot. Born and brought in a small town of Rasheen of Maharashtra Sh. Sonawane told that with the cooperation of Maharashtra Gandhi Samarak Nidhi Pune started, during this trip, till now he has travelled to Thailand, Kambodia, Vietnam, China, Hongkong, Makao, Japan, (Tokyo to Hiroshima) on bicycle. South Korea to USA, Mexico, Guatemala, Honduras,  Al Salvador, Nicaragua, Costa Rica, Panama,Columbia, Ecuador, Peru and South America and after it he went to South Africa, Zimbabwe, Zambia, Tanzania, Rwanda, Uganda,Kenya, Ethiopia, Sudan, Egypt, England, Scotland, Ireland Germany, Spain, Portugal, Georgia, Turkey, Serbia he started journey on foot. After it Macedonia, Albania, Motenegro, Kirgistan Uzbekistan, Afganistan and after travelling to these countries he returned to his own country.

After it, I making up my mind to fight against increasing racism and fanaticism in the world and to create awareness about peace, justice and equality, in 2015 I started doing self service at Maharashtra Gandhi Samarak Nidhi Pune. He told that this last four years journey was sponsored by Maharashtra Gandhi Samarak Nidhi Pune.This organization is 70 years old and that is working on 15 development works given by Gandhi Ji. During this journey many Gandhi Organizations, Peace Organizations, Environment Organizations, Believers of Peace and Love are helping open heartedly. He told that during this journey he made a tour of many schools, colleges, universities and of public places. Where he inspired the people to strengthen the brotherhood, to mingle with the nature and thy creator and to make this world prosperous. On this honoring ceremony on the banks of Bein at Nirmal Kutiya Narinder Sonia,Dr. Swaran Singh and others were also present. 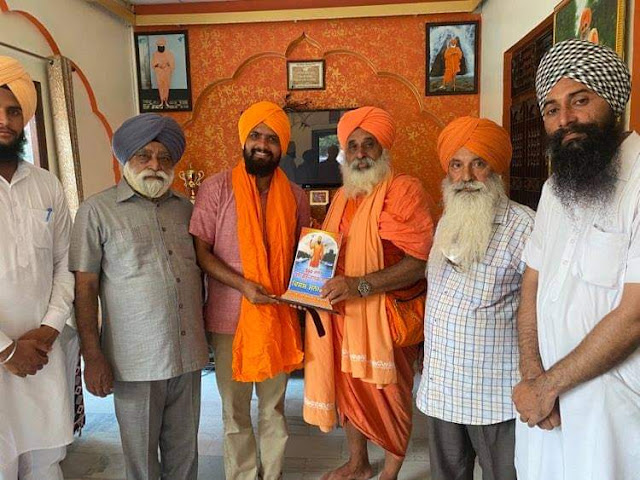