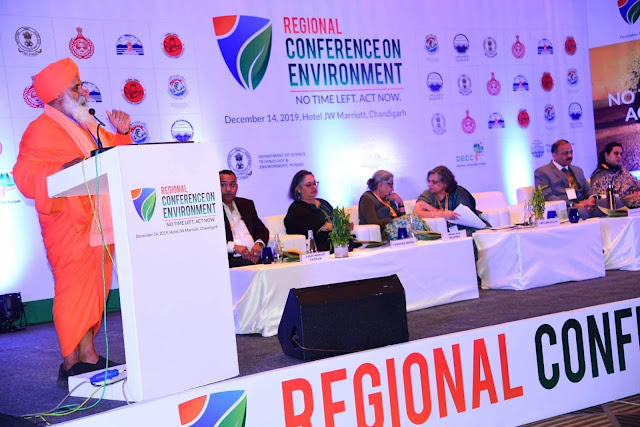 Environment Lover Sant Balbir Singh Seechewal addressing the Regional Environment Conference said that there is a need to become aware of for the officials of the two departments to make the rivers and cities clean and tidy that are being badly polluted in the Punjab. He said that if the officials of Local Body Department and Punjab Pollution Control Department had carried out their responsibilities properly then neither the rivers of Punjab had been polluted nor the garbage had been scattered everywhere in the cities. He said that the officials of the Local Bodies Department are directly responsible for the falling of scattered garbage and poisonous waters of big towns and cities of Punjab in the drains.
These officials have not carried out their constitutional responsibility due to which garbage in the cities is scattered around in great extent. When he was addressing the conference held at Chandigarh then there National Green Tribunal Chairman Justice Adarsh Kumar Goel, head of the Monitoring Committee Justice Pritam Pal and Justice Jasvir Singh and many other senior officials were also present. In this conference the officials and experts from Rajasthan, Haryana, Punjab and Chandigarh were present. Sant Seechewal made it clear that there is a need to make the people fully aware. He raised the question that in these departments IAS officials are appointed. Is there a need to educate them that to throw contaminated waters in the rivers is a crime? Local Bodies Department is creating pollution and Pollution Control Department was to stop them but the officials of the both departments have not carried out their responsibilities. Due to their this carelessness people are dying with dangerous diseases.
Sant Seechewal also stressed on to fix the drinking water supply limit upto 135 liters per person. He said that to stop the destruction of the ground water it is necessary to control the supply. He said that the treatment plants in the cities will only run properly if the supply of water is proper. How under the leadership of Sant Balbir Singh Seechewal the people gathered and with  20 years  karsewa the Holy Kali Bein was cleaned. About this a documentary film was shown that how the natural resources of water were polluted and nobody tried to stop this. Since the year 2000 with the kar sewa the Bein of Baba Nanak is again flowing with pure and clean waters with its Old Glory.