Sant Samaj under the leadership of Sant Seechewal took charge to force the Bundh -with the jaap of Satnaam Waheguru sewa of the Bundh is continuing.

Sant Samaj under the leadership of Sant Seechewal took charge to force the Bundh -with the jaap of Satnaam Waheguru sewa of the Bundh is continuing.
Flood victims left the hope of jhona (rice crop)- the farmers who usually give their lands on lease 50,000 per acre comes under debt.

Kar sewa by Sant Samaj under the leadership of Environment Lover Sant Balbir Singh Seechewal to force the Bundh on the 175 mt long breach in the village Janian Chahal  has been started. Sant Seechewal has been contributing in the sewa by loading the sand bags on his head. The farmers of the village Gidderpindi hope that under the leadership of Sant Seechewal will give big relief to the people by forcing the Bundh as in the year 2008 during floods the sewadars of Sant Seechewal had put Bundh to the 500ft broad breach. To force this Bundh the soldiers of army and the 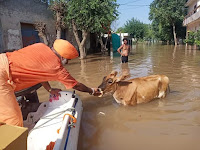 people of other districts in large numbers were also present. The players of Kabaddi and hockey are also contributing in this work. The Bundh work was started last night in village Janian Chahal but the work today gained the speed because the people in large numbers from the whole Punjab are reaching for this sewa. Sant Seechewal himself has been rowing boat continuously for hours for the last 6 days to provide Langar and other amenities to the villages surrounding by the flood waters.

The loss occurred to the people especially to the farmers due to flood can not be yet calculated. The farmers however told Sant Balbir Singh Seechewal that they have taken the land on lease Rs 50000/-per acre and now their rice crops are totally destroyed. The Government is not going to pay the amount they have to pay.  A farmer Gurdeep Singh from the flood affected villages who was lifting the sand bags for the Bundh told that he had taken 8 khet(Field)  on lease and now his whole rice crop has merged in the flood waters. He has to pay four lacs as lease amount, he is worried that how he will meet this loss.
Sant Balbir Singh Seechewal told that the exact loss of flood disaster would be ascertained after the water recedes. People have suffered a great loss. Sant Seechewal said that it will take much time for the normality in the life of flood affected people. The victims are bold enough that they have controlled their tears. The people from the different areas of Punjab who had brought langars for the victims had to take back the langars. There is a big need of mosquito nets, odomos, medicines, dry milk, rashan etc for the flood victims. 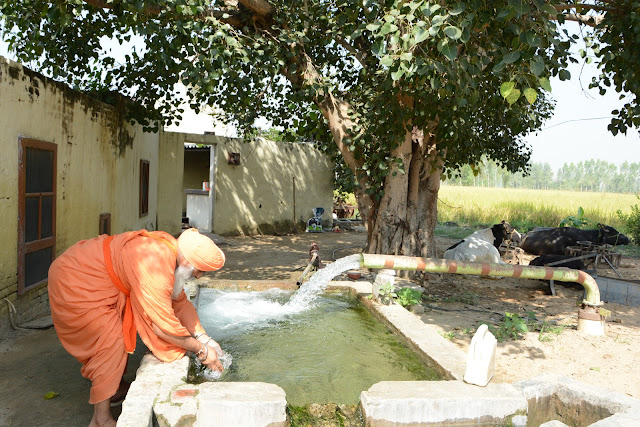